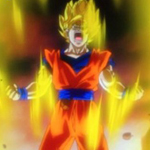 A little over a week ago we posted about the announcement of the next Dragon Ball Z anime feature, which is due out in 2015 with a “funny story” written by series creator Akira Toriyama. That news was quickly followed up with the reveal of the film’s director, Tadayoshi Yamamuro, who most recently served as animation director on 2013’s Dragon Ball Z: Battle of Gods.

Now we have a quick video tease thanks to Fuji TV’s morning show Mezamashi TV. The contents of the clip won’t really shock anyone who’s seen any DBZ at all before, but we could all use a little Super Saiyan Goku in the morning, right?