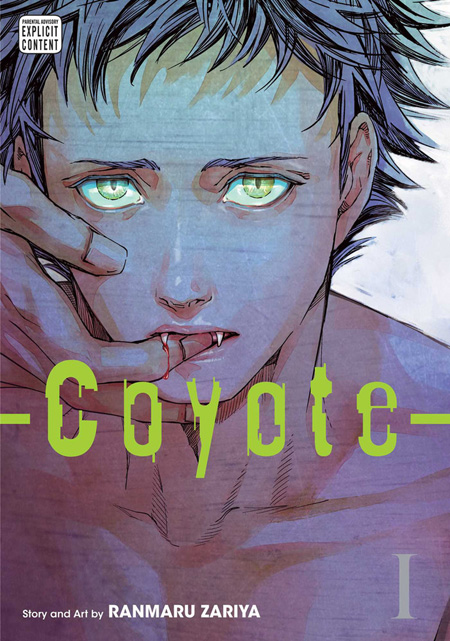 Romeo and Juliet get a supernatural makeover in Coyote. Yes, it’s werewolves vs. gangsters in this scorching male/male romance. Coyote is a member of a werewolf clan that’s been hiding its presence from humanity for the last 70 years. The reason for this is the illegal trade in werewolf parts, a trade overseen by the Galland crime family. Tensions between the Galland mafia and the werewolves are coming to a head. When Coyote meets a handsome piano player he nicknames Marlene, he risks exposing the werewolves to the public once again. But Coyote’s attraction to Marlene cannot be denied. Marlene discovers the truth about his lover but claims he doesn’t care if Coyote is a werewolf. But can their love withstand all-out gang war?

Tightly plotted and set in a generic modern-day Europe, Coyote blends action, sex, and the supernatural into a dark and heady brew. The art, at least when it comes to male characters, is gorgeous. Every character with a speaking part has a unique look, an accomplishment in such a character-heavy book. The backgrounds are detailed and the sketchy inks are both clear and evocative. The ambitious urban fantasy plot and the potential for an ongoing serial story are well established with the first book. Fans of Zariya’s previous manga Void are encouraged to add this to their collections, along with any yaoi fan who enjoys beautiful art and a well-crafted fantasy story.