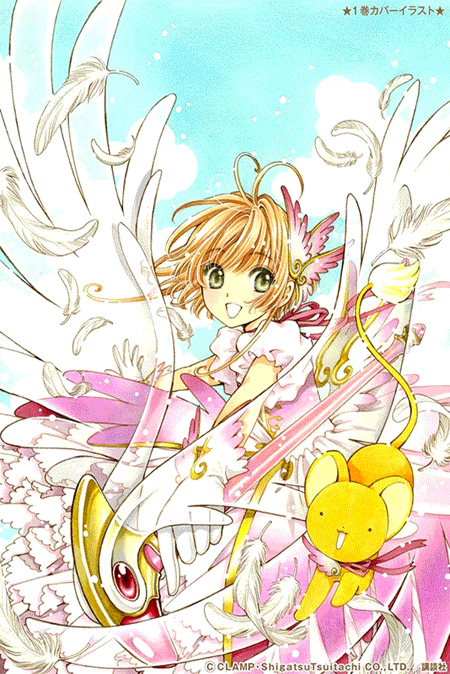 Over the past decade, superstar manga team CLAMP has been revisiting its older work, reviving xxxHolic, Legal Drug, and now its iconic 1990s magical girl series Cardcaptor Sakura. Sakura and her friends, originally elementary schoolers, are now in junior high but still cute as buttons. Things have been quiet on the magical front, but on the first day of school Sakura’s enchanted Clow Cards turn blank and new cards, along with new threats for the gang to battle, begin to materialize.

Volume 1 of Clear Card moves slowly, happy to revisit the characters and their gleefully girly magical world, and in no particular hurry to get the plot underway. The manga spends a lot of time playing catch-up, but not much has changed since the last series. Sakura’s dad is still distractingly pretty, her mom is still an angelic ghost, her BFF Tomoyo still has a passion for fashion and a poorly concealed crush on Sakura, and young wizard Syaoran Li is still a devoted boyfriend.

Everyone in the Cardcaptor universe is either impossibly cute or elegantly beautiful, and each immaculately designed page explodes with cherry blossoms, sparkles, and sunshine. The cutest superhero team in comics, Sakura and her friends spend half their time fighting evil and the other half sewing teddy bears, designing outfits, and baking cheesecake. It looks like a ridiculously fun manga to draw.

So far there’s nothing here to surprise longtime fans of CLAMP, but nothing to disappoint them, either. It’s a pleasant, meandering visit to one of the sweetest comic book settings, where friendly young sorcerers keep evil at bay without disturbing a ribbon or a ruffle.