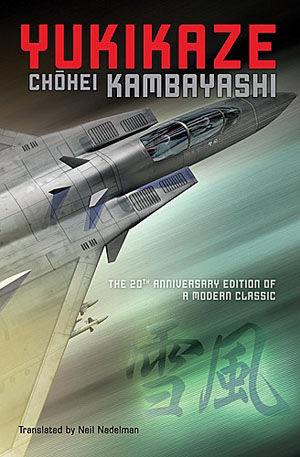 A glance at the cover of Chōhei Kambayashi’s Yukikaze—with its heavily armed airplane and fluorescent speed lines—might give the impression that this is a tale of a man and his plane, and their adventures gallivanting across the skies. Happily, Yukikaze is not another high-octane aerial combat science-fiction thriller (a cumbersome marketing phrase if there ever was one), opting instead to explore humanity and the interaction between man and machine in a surreal war.

The premise is deceptively simple: in the near future, mysterious invaders known only as the JAM open a hyperspace corridor over Antarctica. The initial invasion force is defeated and a newly-united Earth forms a military unit to invade the home planet of the JAM, called “Faery”. This military unit—the Faery Air Force—is composed primarily of the scraps and detritus of the nations of the world: criminals, miscreants, and misanthropes are all sent off to Faery. Cut off from Earth, the officers of the FAF use the sentient planes—the Sylphids—developed by FAF engineers to control and contain the JAM.

The chief protagonist is Rei Fukai, pilot of Yukikaze and member of the Boomerang Squadron, a squadron designed for data collection rather than dogfighting. The members of this squadron are under strict orders to return alive, with their data intact, even if that means abandoning other FAF pilots on the battlefield; as a result, the members of Boomerang Squadron are seen as the most detached, mechanical, and inhuman of the FAF, with Rei viewed as the most inhuman of them all.

The deception in the premise is that, like the faeries that lend their name to the planet of the JAM, much of the novel’s impact lurks underneath the surface veneer the narrative provides. The eight stories of Yukikaze depict not the inhumanity of Rei Fukai but his humanity, slowly disintegrating as the answer to his oft-asked question—are people necessary in this war?—tilts towards “no” over the course of the novel. The war increasingly appears to not be between humanity and the JAM—for humans cannot even begin to fathom the sort of being the JAM are—but between the machines of humanity and the JAM.

This war between two groups of machines and the humans that are their pawns takes on increasingly bizarre implications over the course of the novel. The machines of humanity irrationally insist that humans are necessary to the war, even though the machines admit that the lessening of the human element would improve efficiency, while the machinelike entities of the JAM manufacture eerie simulacra of humans. If humans are inevitably to be eclipsed by the efficiency of artificial intelligence, Yukikaze asks, are we to be disregarded by them, as evidenced by the behavior of the JAM, or are we to live in a symbiosis with them, essential not to their operation but to their concept of the world?

Stylistically, the novel is solid. The few combat scenes are generally narrated in a sterile, technical fashion, which is initially off-putting but intentionally so. In fact, the novel unfortunately begins with a combat scene, which puts a damper on the first story for those unaccustomed to Kambayashi’s style. Outside of the combat scenes, though, the sterility of the prose gradually fades to lay bare Rei’s essential, if often denied, humanity. By the end of the novel, Rei—initially described as the most machinelike, inhuman member of the FAF—is left feeling like its most human.

The back of the book contains additional material, much of it prepared for the re-issue of Yukikaze in Japan in 2004. There’s a technical spec-sheet on Yukikaze (which is nice, but unnecessary for those uninterested in the technical side), an afterword by Kambayashi, and two short essays ruminating on the themes and questions raised by Yukikaze. The essays themselves are excellent supplements, and I highly recommend reading them; personally, after reading the first couple of chapters and feeling somewhat nonplussed, reading the two essays in the back was a tremendous help in contextualizing the novel and seeing what Kambayashi was building towards.

For a novel written in 1984—which makes it exactly as old as I am—Yukikaze still feels remarkably relevant to our times, especially given the way that technology is increasingly becoming a dominant aspect of life. We may never have artificial intelligence of the level described in Yukikaze, but the essential questions of humanity and the relationship between humans and machines posed by the novel are perhaps more relevant today than they were in 1984.