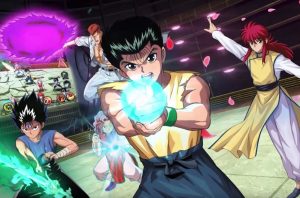 Yu Yu Hakusho 100% Maji Battle is a smartphone game that’s on the way to mobile devices in Japan this year, with KLAB Games and Axel Game Studio behind the project. The game will let players create teams of super-deformed characters from Yoshihiro Togashi’s series and pit them against one another in five-on-five battles.

Original cast members—including Yusuke’s Nozomu Sasaki, Kuwabara’s Shigeru Chiba, Kurama’s Megumi Ogata, Hiei’s Nobuyuki Hiyama, and Genaki’s Hisako Kyouda—are getting in on the action, and you can see some footage in a pair of 30- and 15-second commercials below.