Usurper of the Sun 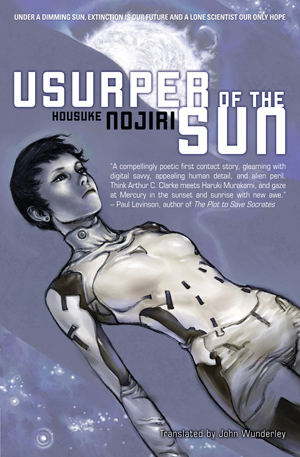 Housuke Nojiri’s novel Usurper of the Sun is a novel of first contact, of enigmatic artifacts and ineffable extraterrestrials, of cognitive science and astroengineering. When high school astronomer Aki Shiraishi notices a tower on Mercury during its transit of the Sun, she immediately finds herself regarded as the expert on the phenomena—soon to extend to a giant Ring which blocks out the Sun and gradually plunges Earth into an ice age. The UN quickly forms a task force (the UN Space Force, but everyone knows its secret and true name is UN Spacy), and Aki, by now a fully trained astronomer with a specialty in the Ring and its Builders, volunteers herself for the trip to investigate and destroy the Ring. They succeed, but Aki’s work has barely begun, for now she must prepare Earth for the imminent arrival of the Builders, and convince the remnants of humanity that they are not malevolent entities bent on the destruction of Earth.

Usurper is profoundly, thoroughly capital-H hard science fiction: it is foremost a fictive investigation into alien consciousness and cognition, with dalliances on the side with alien nanotechnology, artificial intelligence, and interstellar flight. Debates on the nature of the Builders—are they intelligent? conscious? sapient? benevolent? apathetic? bent on galactic destruction?—dominate the book, particularly between Aki and programmer Raul Sanchez. Raul has developed an AI in a closed system that appears to be conscious and highly intelligent, yet has not developed language or a sense of “other”; he argues that the AI, which he has named Natalia, is closer to how the Builders may be themselves, beings of pure cognition, and therefore poses that Natalia is the best method by which to contact them.

This frequently fascinating debate on alternative forms of consciousness permeates the novel, twining with the time limit until the Builders arrive in the solar system to provide the main narrative thrust. Unfortunately, the novel serves primarily as a way to explain the concepts Nojiri presents, and other aspects of the book suffer as a result. Aki is not unlikable, but she’s rather bland and uninteresting as a protagonist; most of the other characters are flat and tend to represent concepts or viewpoints more than people. This fits well with the naturalist style of the novel, and wouldn’t really be a problem—unfair as it may be, science fiction, and in particular hard science fiction, is not exactly known for rich, complex characters—except that sometimes Nojiri attempts pathos, which comes off as awkward at best, and downright annoying at worst. The most egregious example is Aki’s brief love affair with a fellow member of the UN Space Force: in the span of twenty pages, the two meet, a potential relationship between them is barely hinted at, they kiss, and then he dies. For an event which has a deep effect on Aki, and is fairly important later in the novel, the reader isn’t really given a chance to invest any emotion into the relationship, making later references to the event ring hollow instead of provoking sympathy.

All this detachment could also be the product of the prose style used in this translation. Unlike most contemporary third-person novels I’ve read, where the narration is through a specific character, Usurper’s narrative style sounds as though the narrator is telling a story about Aki. It’s a subtle shift of narration, but it adds a distinct level of detachment from the events and characters. I’m not sure whether this is a common feature in Japanese third-person novels (nearly every Japanese novel I’ve read has been written in the first-person) or a specific, intentional stylistic quirk of Nojiri; if it’s the latter, it’s quite possible to read the style as though the “narrator” is the Builders themselves, which could add an interesting layer on top of the story as presented.

Usurper is not a bad read at all; you could certainly do a lot worse, especially if you’re looking for a good hard SF novel that deals with theories of consciousness and cognition and isn’t written by Robert J. Sawyer. And even if you’re not, the story is quite enjoyable simply as an alien artifact / first contact story: I grew up reading and enjoying Clarke’s Rendezvous with Rama and Sagan’s Contact (and, more recently, Alastair Reynolds’s Pushing Ice), so I quite unabashedly love novels with either of those elements on principle alone. I also admit to being easily entertained, so there’s your grain of salt for that.