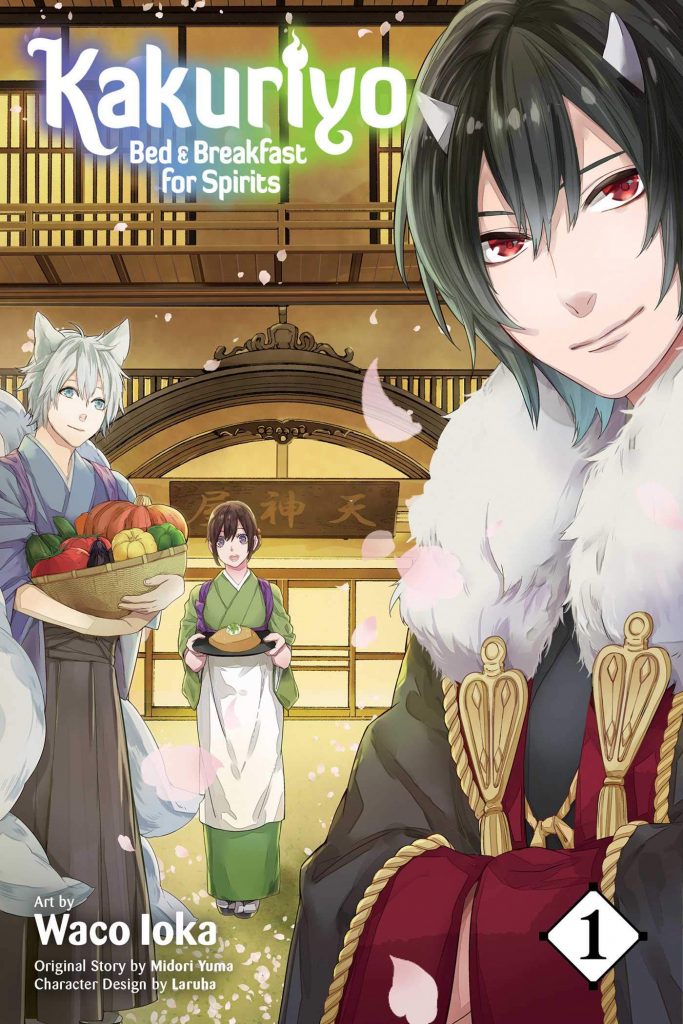 College student Aoi is mourning the death of her grandfather, but that doesn’t stop her from feeding yokai when she sees them. Yokai, usually called ayakashi in this manga, are just a regular part of her life, and they have been since she was little. She has to be careful, though—ayakashi are known to eat people. This is part of why she wants to make sure they’re all well-fed.

Her grandfather was also able to see yokai, and he could even travel into their world. It turns out that he used to haunt an inn found in the other world, and he raised such a debt that he promised to give his granddaughter to pay it off. (Not the nicest grandfather, it seems.) So after feeding an oni (referred to as an ogre), Aoi is kidnapped into the spirit world. The ogre, who looks like a handsome young man with horns, says that Aoi must become his bride in order to pay off the debt.

Aoi is, no surprise, unimpressed with this wooing and refuses. Instead, she wants to pay off her grandfather’s debt — approximately one million dollars—by working at the inn. The ogre says she may do this, but he warns her she might be eaten by other yokai.

This doesn’t seem to be an idle threat, as many of the yokai do not like Aoi and don’t want her here. Aoi also has difficulty trying to figure out what job she can do at the inn to avoid being a bride.

The first volume of Kakuriyo: Bed & Breakfast for Spirits mainly sets up the scenario and introduces us to a number of yokai. It’s fun seeing creatures from Japanese folklore show up like regular people (sort of) at the inn, and the back has a nice set of notes explaining the different folklore. The ogre is still a pretty vague character, though we’re told how powerful he is. Aoi also isn’t very fleshed out yet, and the most personality goes to Ginji, a silver-haired nine-tailed fox. Ginji is able to take on different forms, including a young boy and a woman, but normally he looks like a young man with fox ears and tails. While the ogre seems to be Aoi’s eventual love interest, Ginji appears to be much more promising for the role judging by the way he hangs out with Aoi and helps her around the inn.

A Kakuriyo anime played in Japan last year and has been licensed by both Crunchyroll and Funimation. But it’s not based on this manga—the series started out in the format of light novels, and both the manga and anime are based on those.