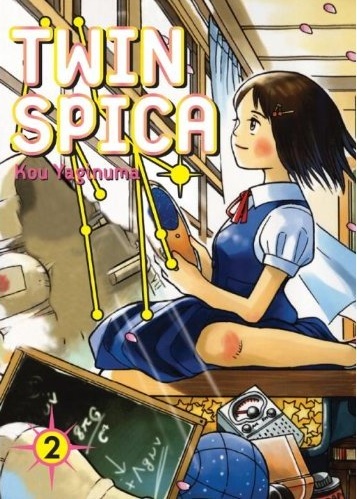 When we last left Asumi Kamogawa, she was in the early stages of admittance to the Tokyo Space School, gradually becoming accustomed to both the rigorous program and the mix of classmates with which she’ll have to learn to get along. With someone like Kei, it’s not so difficult; as easy-going as Asumi, the two have become fast friends. However, Marika remains cold and distant, though cracks in her shell begin to show themselves under the right circumstances.
Regardless of who gets along with whom, they’re going to have to cooperate with one another if they plan on making it through training, which works them all double-time to ensure they’re properly prepared should they ever find themselves chosen to blast off toward outer space. Unfortunately, there’s much more to hinder Asumi than a series of arduous classes, and an ill-fitting spacesuit is soon revealed to be the least of her worries.
The second volume of Kou Yaginuma’s deservedly lauded series takes further steps in fleshing out its cast of characters, showing the creator’s admirable attention to detail when applying and expanding their personal nuances. Despite Asumi’s seemingly unshakable positive outlook, these chapters show that she’s not immune to the occasional dark cloud—whether it comes in the form of her daily interactions with her peers, or via the cold, unrelenting grip of the past.
Yaginuma’s art continues to complement the story and themes well, especially when given ample room to breathe. There are a handful of contemplative moments in Twin Spica that reveal themselves through lush, starry-eyed spreads. These often drive home the dreams and aspirations of Asumi and her classmates, both specifically and in an overall assertion of the power and vast array of possibilities associated with reaching for one’s potential.
Equally as effective are the two bonus stories appended to the end of volume two. “Campanella’s Forest” and “Our Stars, Leaf Stars” delve into Asumi’s past, providing further context for her upbringing under the care of her father, as well as the gestation of her near life-long dream to ascend to the starry heights beyond our atmosphere. At times, these shorts provide the most melancholy moments of Twin Spica. When combined with her difficult history, Asumi’s almost unflinching positivity and determination makes for an endearing, if occasionally heartbreaking mixture.
Twin Spica ultimately isn’t about the sad moments left years behind, though; it’s about breaking through them and any other adversity that may rear its head or obstruct one’s path. The series continues to work because of a cast of actual characters that are much more than what they show on the surface; this is something at which Yaginuma excels. If you haven’t given Twin Spica a chance yet, be sure to rectify that soon.
Publisher: Vertical Inc.
Story & Art: Kou Yaginuma
© 2010 by Kou Yaginuma
Reviews 1117