The Stories of Ibis 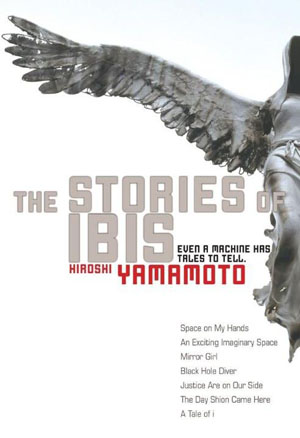 Part short story collection, part novel, Hiroshi Yamamoto‘s The Stories of Ibis is largely a story about stories. It lurks somewhere in the interstices between the framing story of an android telling stories a la Scheherazade to a storyteller and the stories she tells. It places itself between the real and the virtual, and ignores the arbitrary delineation between both.

The framing story presents a future where machines have taken over the Earth, leaving small pockets of humanity scrabbling for existence. An itinerant storyteller, after a brief scuffle, ends up in a machine-run hospital room with Ibis, who coyly tempts him with the seven stories she tells which, according to her, reveal the reason behind the fall of man and the rise of machines. She presents six of the stories as fiction, but acknowledges all the while that fiction is a truth, cleverly disguised. The seventh is her story, and—while clearly fiction to us, the reader—is the true story of the downfall of man.

The stories are the main draw of the book, and although sometimes kludgy in presentation (especially the first, shorter five), each raises questions or doubts about where the line between virtual and real should be drawn, or even if it should be drawn at all. The first two stories, “The Universe on My Hands” and “A Romance in Virtual Space”, deal with human-human interaction in virtual and fictive spaces, touching on the potential for very human relationships to be formed over the Internet: the first story shows the camaraderie between Internet roleplaying friends, while the second gives us a very real romance that begins entirely in the virtual realm.

If it is possible to develop complex interpersonal relationships across virtual spaces, then clearly the next step would be the relationships between fully real and fully virtual entities. The next two stories portray relationships developing across the natural / artificial intelligence divide: “Mirror Girl” is the story of a young girl who grows up sharing her personal experiences and forms a deep friendship with an AI toy, and “Black Hole Diver” shows a lonely AI running a deep-space station orbiting a black hole developing a fondness for one of the many daredevils who stop by the station to attempt to cross the singularity into another dimension.

The fifth story, “A World Where Justice is Just”—sort of the oddball, and the weakest story in the book—is set inside a virtual realm comprised of a mélange of anime, video game, and tokusatsu tropes, where personality imprints of different people engage in constant play in a pseudo-afterlife while humanity in the real world destroys itself via warmongering. The story works fine and makes its point, but it’s just so… silly… that it’s sort of hard to take seriously.

The sixth story, “The Day Shion Came”, is a longer novella (and the strongest story in the book) that builds on the relationship between the real / virtual by introducing an artificially intelligent android nurse to assist at a nursing home. Here, differences between man and machine come into sharp focus, as the android Shion does not behave exactly like a human (as was the intent) but neither does she lack personality; instead, her personality develops on its own track, peculiar to her own circumstances and the fact that she is bound by different rules than humans are.

The seventh story, “Ai’s Story”, the only one presented by Ibis as true, pulls all three strands explored by previous stories into the truth of why humanity fell. I shan’t go into too much detail for this one—I feel I ought to somehow keep some of the mystique intact—but the implications presented over the course of the story are complex and potentially unsettling and bear a bit of discussion.

Yamamoto is clearly an otaku, and the otaku’s sense of persecution over the choice to live more in a virtual realty than reality itself permeate many of the stories, sometimes veering close to apologetics. I don’t necessarily disagree with his condemnations—I firmly believe in the importance of fiction and mythopoeia in helping people understand themselves, others, and the world around them, and in providing a safer environment to come to grips with complex, troubling issues—but taking The Stories of Ibis at face value, I can’t help but be a bit disturbed by the very otaku notion that virtual or fictive creations are inherently better than human beings on average. Equal, yes, especially if we’re talking about AI (as we are in Ibis), but sticking them outside the Platonic cave we’re supposedly stuck in? I wouldn’t discount humanity quite so quickly.

I doubt, however, that Yamamoto intended Ibis, with how it plays at the fringes of fiction and reality, of which stories are true and which false, to be taken at face value. I don’t quite think it’s a full-bore dystopia, but there’s a clear warning to humanity about its inhumanity to itself within the novel. And no matter how sly or straightforward The Stories of Ibis is in the end, it clearly depicts the consequences of societal conditions that force people to abandon humanity for virtual creations.