The Minds Behind Eden of the East 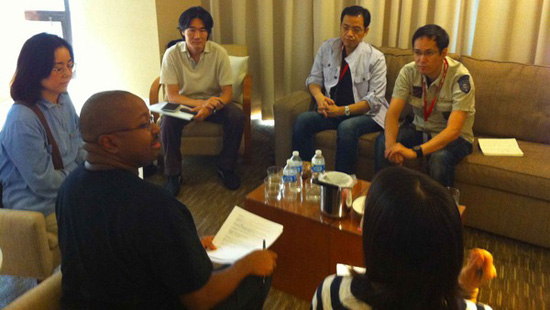 Somewhere in Japan, there’s a couple of men likely planning to add yet another intricate techno-thriller to their already impressive resume. Their most recent work, Eden of the East, has captured many anime fans’ attention due to its intense plot and thrilling pace, which has at times gotten reviewers to place it alongside the likes of The Bourne Identity trilogy and the TV series 24, among others. This duo also gained high acclaim for their work on the anime series Ghost in the Shell: Stand Alone Complex, which managed to take the manga created by Masamune Shirow and present new, more accessible storylines about Major Kusanagi and the officers of Section 9. This version lead to 2 seasons (broadcast in both Japan and the U.S.), and carved its own place in anime fandom apart from the two Ghost In the Shell theatrical films. 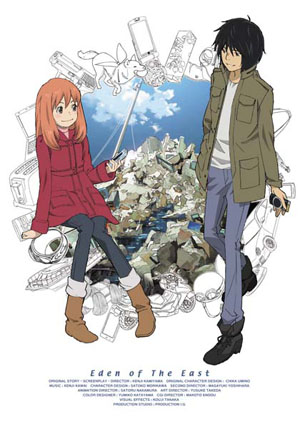 The men responsible are director Kenji Kamiyama and animation director Satoru Nakamura. Along with their current producer Tomohiko Ishii, they consented to give anime fans some insight into their works, primarily focusing on Eden of the East as it is their newest one to be released in America by Funimation Entertainment.

To start we discussed the rather shocking initial scenes depicted in America, and how they came to be. Director Kamiyama notes “The girl who threw away the coin into the garden at the front of the White House has a tendency to make her wish whenever she finds fountains. I think general Japanese girls have the same tendency. This time the girl wishes upon the White House, she sees it as like a Shrine, to make better the current atmosphere of Japan that has covered the whole country and makes people depressed.”

He continued, “Akira Takizawa, who has lost his memories, appeared in the middle of the street without any of his belongings including clothes; he is literally naked. However, he shows he has enough ability to manage it, escapes from White House security, and goes back to his house by himself quickly.

“We implemented this scene at the beginning as a metaphor that emphasizes his instinct to quickly get the situation he is in, and the solutions to the problems he faces, very high on the audience visually.” (In the case of Akira, he appears nude and, with the help of a young girl and a cell phone tied to millions of dollars, he makes his way back home to Japan in order to find out why he’s an amnesiac.) 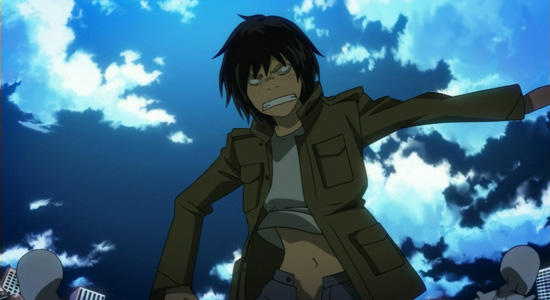 Between Ghost In the Shell, Moribito, and Blood the Last Vampire, Kamiyama has demonstrated a predisposition toward female central characters, but says he’s not really trying to make statements with those choices. “We placed females as a main character in the two stories, Ghost in the Shell and Moribito, on purpose. They are strong and they are acting in the story like male characters do. We didn’t intend to establish a high profile of strong female characters in the animation world. Rather than that, we thought the use of this setting would make the stories more interesting.”

Kamiyama first gained notoriety for his work on Blood the Last Vampire, where he and his crew became leading innovators in digital animation and have kept pace with subsequent projects. “When we created Blood the Last Vampire, we were considered being at the edge in the industry, but now we are facing a big challenge. Modern digitalization has brought big changes into the animation industry; it allows the creators to produce the films much easier as a result of it, and the products we are now seeing are commonplace. Therefore, we think it is difficult to be at the edge in the future. The issue we have to address is finding the way we can make our movies distinguishable from the rest…” 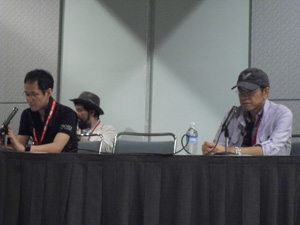 Producer Ishii, who started out producing films at Studio Ghibli and met his collaborators while working on Ghost In The Shell: Innocence, echoed some of these sentiments when the trio held a panel during Anime Expo. “It’s difficult to come up with good anime since Japan has become well off economically and we’ve run out of things to overcome. I don’t know what there is to fight against and it’s this kind of lack of inspiration that’s putting us in a stall, but director Kamiyama came up with a very innovative idea as to what Japanese people might see as something to overcome.”

Animation director Nakamura, who was influenced by Space Runaway Ideon during high school, acknowledged some of the difficulties in executing Kamiyama’s vision. “The visuals were very different from previous works. It was a challenge to animate the designs.” It’s interesting to note this as Nakamura has been working with director Kamiyama since Ghost In The Shell.

It’s likely that Kamiyama’s passion for pushing boundaries in terms of story and art are what led to him creating those challenging designs, as he has serious enthusiasm for the project. “Eden of the East was the very first title that I worked on that I wrote from scratch. The characters are like something that came out of myself. They are very fond creations of myself.”