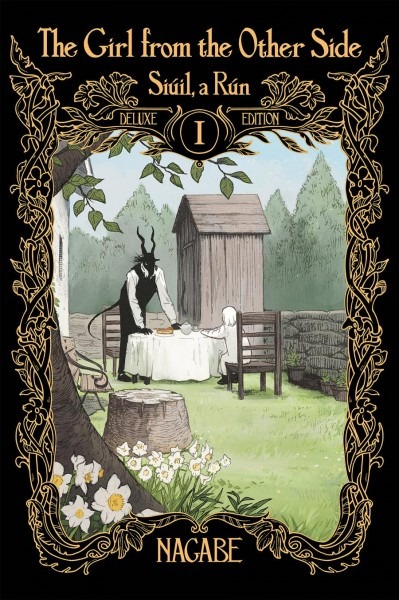 In the first volume of The Girl on the Other Side Siúil, a Rún Deluxe Edition, Shiva is a little girl who is taught never to touch an Outsider, because then she will be cursed.

But after this she lives with an Outsider. Her aunt had abandoned her on the Outside, and a hideous creature with horns — an Outsider — took her in and cares for her like a loving parent. He makes her meals, reads her stories, and watches over her. She calls him “Teacher.” He lets her believe that her aunt is coming back for her at some point, though he’s convinced that isn’t the case, and he’s tormented about whether or not to tell the truth.

And what is the truth in this manga? There are many mysteries to be explored. There is a land called the Outside, where monsters live, and a land called the Inside, where humans live. But human soldiers keep coming into the Outside. First they want to kill Shiva. Then they want to capture her. What is their obsession with her, and why was she abandoned in the first place?

The Girl from the Other Side starts out showing the family unit of Teacher and Shiva, and it moves at a slow pace, feeling a little ho-hum. However, the pace continues to pick up as the story goes on, until it gets increasingly gripping and fascinating. There’s a haunting quality to the manga, and the sketchy and oftentimes dark artwork gives a surreal, gothic sensation. It has the feelings of fairy tales or legends, and it’s built its own world with its own rules.

The Girl on the Other Side Deluxe Edition contains three volumes. It includes some pages in color, and exclusive covers from creator Nagabe. By the time the first deluxe volume is finished, the story has gotten so white hot and intriguing that it feels like there’s too much time before the second deluxe volume is released.

Already existing fans of The Girl on the Other Side who own the manga might still want to get these deluxe editions for their collections. And people who haven’t checked it out yet have a handy deluxe version so they can get more steeped into the story.

The Girl on the Other Side 1