Sword Art Online fans have been waiting patiently for news of the release of Sword Art Online the Movie -Ordinal Scale-, and now Aniplex has revealed the North American premiere date and location.

The film will premiere at the Egyptian Theatre in Los Angeles on March 1, 2017.

If you’re in LA, tickets for the premiere of Ordinal Scale will go on sale at the official site on Tuesday, November 15 at noon. If not, keep an eye on the site anyway, as Aniplex is set to announce further locations and ticket sales soon.

Aniplex also released some details about the film’s plot, which look a little like this:

In 2022, the world of virtual reality was upended by the arrival of a new invention from a genius programmer, Akihiko Kayaba, called NerveGear. It was the first full-dive system, and with it, came endless possibilities to VRMMORPGs.

In 2026, a new machine called the Augma is developed to compete against the NerveGear and its successor, the Amusphere. A next-gen wearable device, the Augma doesn’t have a full-dive function like its predecessors. Instead, it uses Augmented Reality (AR) to get players into the game. It is safe, user-friendly and lets users play while they are conscious, making it an instant hit on the market. The most popular game on the system is “Ordinal Scale” (aka: OS), an ARMMORPG developed exclusively for the Augma.

Asuna and the gang have already been playing OS for a while, by the time Kirito decides to join them.

Ordinal Scale was announced back in October 2015, where it was revealed the cast and crew from the series would be returning. The film debuts February 18, 2017 in Japan and is set to roll out to 1,000 theaters around the world. 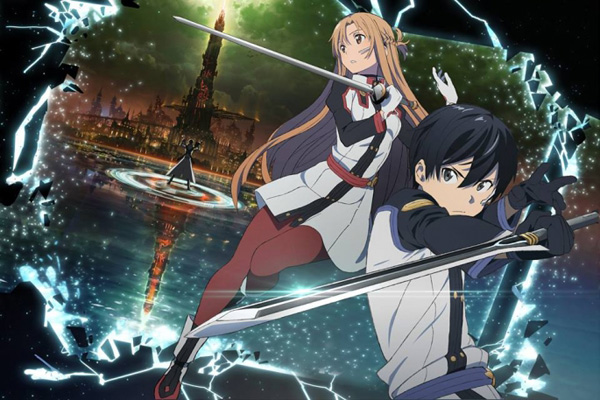