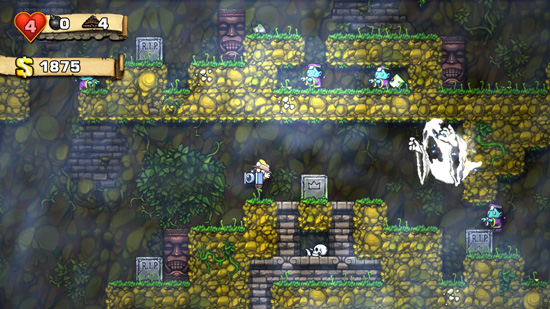 When I first heard of Spelunky it was via friends who were hopelessly addicted to Derek Yu’s original PC release of the throwback platformer. Winds carried seemingly impossible tales of some who had plunked down hundreds of hours, and toward what? An action-adventure game with randomly generated stages? That last part alone left me cold to the concept of Spelunky, as I’m normally not a fan of anything randomly generated… and then it finally hit Xbox Live Arcade. After just one night—a single sprawling introductory dip into the world of Spelunky—I got it.

Flash forward countless hours and I still get it; Spelunky is an experience that’s both cruel and kind in a number of ways. As an unnamed adventurer, the look of which is selectable from the start, players enter a mysterious series of caves with the simple goal of grabbing loot, rescuing a damsel of their choosing, and making it to the exit intact. Initial Mines stages transition to a Jungle setting, then an icy cavern, and so on. The only catch—and it’s a mighty one—is that dying sends you packing back to the very beginning.

It’s a familiar set up for those who grew up on classic games, and while it can seem kind of unforgiving at first, Spelunky rewards careful play and deals in harsh lessons about recklessness. Yes, there are plenty of one-hit death traps amidst an increasingly vicious roster of enemies—spikes line the bottoms of pits, stone statues spit darts on a hair trigger, boulders chase would-be idol snatchers—but there’s always a way around the many perils and pitfalls if you play it smart and think ahead. Holding onto a rock or another throwable item, for instance, lets you trigger traps before they can get the drop on you. Time is against you as well, though, and taking too long results in some creepy music and a drifting ghost that spells certain doom.

Starting something over and over again can be demoralizing and humbling, but the repetition eventually pays off, making each section of a stage that much easier than it was just a few tries prior. Pass from one area to the next enough times with the proper supplies and you’ll also unlock the ability to warp deeper into the caves from the beginning. Doing so is great for learning the later levels without having to trek to them each time, but rocking high scores and truly completing the game requires a fresh start.

The Xbox Live Arcade version of Spelunky offers a number of changes and improvements, including some manic four-player co-op. It’s only local, though, so don’t plan on getting together with a group of online friends for some intense exploration. It’s a shame, because Spelunky would work wonders as a cooperative online game, but the couch co-op is a nice bonus for those with willing adventurers on hand. Also, while the new visuals looks fantastic, the option to switch between the HD facelift and the original sprite graphics would have been welcome. 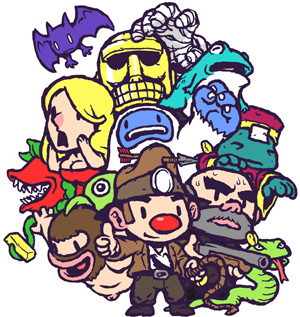 Spelunky is entrancing from the moment our hero first sets foot in the ever-changing caverns, left with nothing but his wits, his whip, and whatever he can find along the way as ominous music fades in and out, making way for the rest of Eirik Suhrke‘s excellent soundtrack. If high praise for such a seemingly simple setup seems a bit mad to you, just wait until you’ve spent a few days in those caves, wondering if you’ll ever make it to the light at the end of the long and twisting tunnel. Even when failure bites down hard, all it takes is one rousing “Wow, that was a really good Spelunky session” to keep the hooks in for good.