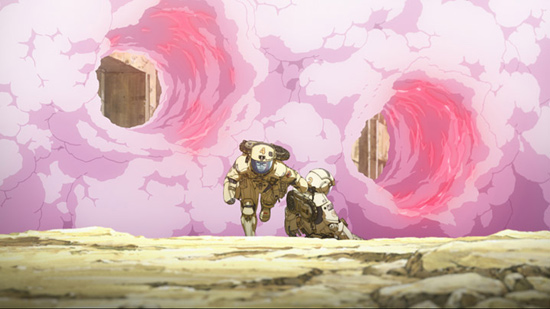 Short Peace, if you’ll recall, is the latest film from Katsuhiro Otomo – a man who’s forever linked with his masterwork Akira, but should also noted for his contributions to the world of anime shorts, stretching all the way back to Labyrinth Tales and Robot Carnival in the 80s, to his legendary 90s omnibus Memories, and now this latest film.

Short Peace is landing in U.S. theaters courtesy distributor Eleven Arts and Sentai Filmworks. The film will roll out to 45 theaters starting April 18th and continue (with some screenings for our lovely Canadian neighbours) through May.

We reviewed Short Peace way back during its Japanese release, so we won’t go into too deep a rundown here, but it should be noted that since our review, Short Peace picked up some serious cred in the west when the Shuhei Morita-directed short, “Possessions,” was nominated for a Best Animated Short Oscar – we suspect that nomination definitely played a part in the film being picked up for a theatrical run.

For those not living near one of these screenings, Sentai will be releasing the film on DVD and Blu-ray.