Shigofumi: Letters from the Departed 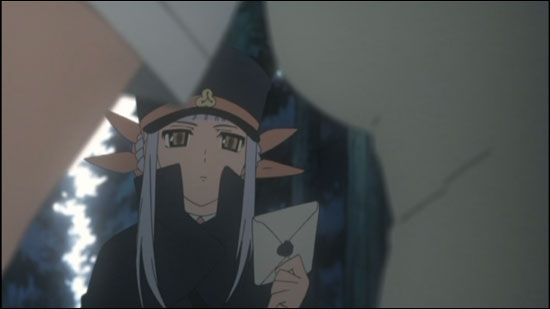 Here’s a TV series that knows how to arrange its visual hooks. It starts with a doe-eyed, slender, diminutive girl with a ponytail, and decks her out in a stylized letter carrier outfit, complete with adorable little hair ribbons. Add a gimmicky, ornate walking staff as fashion accessory #1, and a semiautomatic pistol as fashion accessory #2. Finally, give her a pair of angel wings that appear and disappear when it’s convenient to the story, and you’ve got what, based on appearance, looks like the very essence of cheap anime pandering, circa 2008.

But here’s the thing: Shigofumi, a 13-episode joint from J.C. Staff, is directed by a man named Tatsuo Sato. Sato is well-known for directing the TV series Martian Successor Nadesico and the experimental short Cat Soup. These pieces are very different in tone, but they are both handled by Sato with energy, wit, and economy, as is Sato’s best-known original creation, the ferociously underrated Shingu. Shigofumi, happily, is proof that Sato is still at the top of his game, a director capable of wringing an awful lot of quality and atmosphere out of the desperately short budget and timeframe that most modern anime TV shows are afforded.

Let’s analyze the title: shi-go (after death) fumi (letter). This cartoon’s heroine and mystery girl, Fumika, works for an unspecified supernatural agency delivering these so-called shigofumi, last-gasp letters from the dead to the living.  Usually these letters contain sweet, wistful final words, leaving the recipients grateful and overcome with emotion. Sometimes they’re less congenial or outright cryptic, and sometimes they’re just weird and ominous and a little threatening. As the series opens, we meet Fumika trying to deliver a shigofumi to the boyfriend of a high schooler whose father has just died under odd circumstances. She finds a guy who might fit that bill (recipients of the letters aren’t always obvious, so the job of a shigofumi carrier can sometimes involve detective work), but when he reads the letter (obviously from his would-be ladyfriend’s dad) he’s completely mortified, and it wraps up with an angry confrontation and another dead body. That’s one reason why Fumika carries a pistol—passing out mail from the recently deceased can sometimes breed hostility. (There’s also another, more sinister reason.) 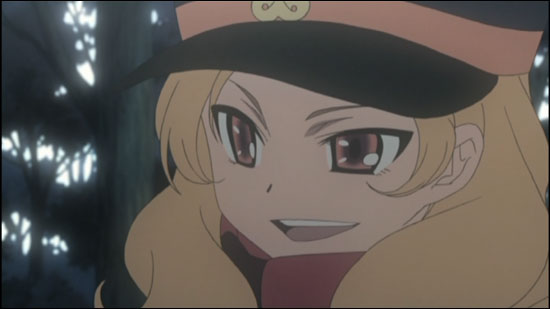 In episode two we meet more characters (a tired, harassed detective; cynical schoolmates of the boy and girl from episode 1) and are led to believe that Fumika’s adventures in shigofumi delivery are episodic. But as the series continues, the seemingly bit-part characters start to make regular appearances, and the story slowly and carefully reveals more and more about Fumika herself. Her colleague Chiaki is a bubbly girl of seemingly similar background, but she is quick to explain that she delivers shigofumi because she’s been dead for decades and got bored being a regular old ghost. However, as Chiaki points out, Fumika isn’t forthcoming about the details of her demise, and she’s still aging, which phantoms aren’t supposed to do. More details are revealed under the scrutiny of Kanaka, Fumika’s staff—the big stick isn’t just a fashion accessory; it can float and move on its own and acts as a ward to its user. Kanaka in particular strikes a nice contrast with the quiet, dour Fumika—it speaks with the voice and personality of an upbeat young lady, and relentlessly questions the wrinkles in Fumika’s odd backstory.

Shigofumi is a quality supernatural suspense story that establishes an intriguing premise and slowly builds on it. But it doesn’t just stop at the creepy stuff—it uses Fumika’s story as a framing device to address a variety of social ills, from child abuse to neglectful parenting, to untreated mental illness and terrifyingly, paralyzingly pandemic school bullying. The calculated bullying of several characters at school is probably the show’s biggest source of grief, and it has an immediacy that makes me wonder if the original creator, author Tomorō Yuzawa, didn’t have some run-ins with high school sociopaths himself. Some of the show’s stand-alone stories also pack a surprising emotional wallop, particularly the tale of a terminally ill man and his niece, and the story of an elderly couple who die within days of each other and seek to send their orphaned pet cat a symbol of reassurance. In more ways than one, Shigofumi punches above its weight.

There’s not much to say about Section 23’s DVD release. They do include one pretty awesome extra: a set of brief audio dramas set to pictures of the characters. These are handy for providing a bit more background, but be warned—save them for after you watch the show unless you want to spoil the crap out the series for yourself. Subtitles are notably better than many S23 releases—very few mistakes or timing errors this time around—and the widescreen video looks quite good. I like Kana Ueda’s stoic performance as Fumika, but for me the show is stolen by Masumi Asano, 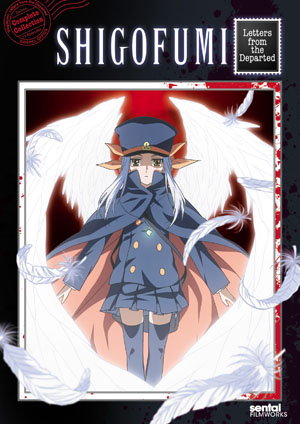 who’s very good at playing the ditz (you’ll remember her as Hafuku from Ikkitousen) and acquits herself well as Chiaki.

Shigofumi‘s a quality supernatural thriller, but I think what impresses me most about it is its constant level of quality.  Very often TV shows will start strong and end weak, but Shigofumi avoids this trap. The show’s major plot arc does wind up at around episode 8, but there’s still enough gas in Sato and company’s tank to keep things interesting through episode 12. Episode 13, which was released straight to video in Japan, is a strictly optional affair—it’s not bad, but it fills in a few more details. Overall, Shigofumi is a nice mood piece, a show that is eerie in a way that many suspense tales try to be, but very few succeed at. It captures very nicely the weird places between life and death; if you hold out for a Halloween viewing, wait an extra day and watch it on Dia de los Muertos.