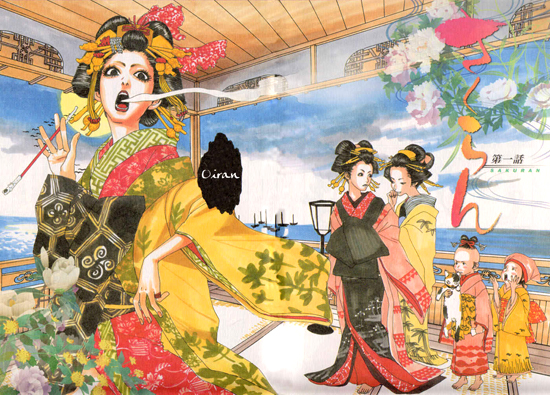 Let’s go ahead and get the obvious out of the way: Sakuran is a completely gorgeous manga from beginning to end. The art of Moyoco Anno—Sugar Sugar Rune, Happy Mania, wife of director Hideaki Anno (Evangelion)—has its own flow and grace to it, and the fact that Vertical preserved the original color intro pages to each chapter goes along way toward making this an essential addition to any manga fan’s collection. The expressive, bottomless eyes are at times reminiscent of Natsume Ono (House of Five Leaves), while the deceptively elaborate, not overly rigid linework occasionally reminds me of Taiyo Matsumoto (Tekkonkinkreet), but Anno has a style all her own, and it’s one worth poring over.

Sakuran takes place in the Edo-period pleasure quarter of Yoshiwara, where we follow the life of a young girl named Kiyoha and her rise through the brothel’s ranks. When we first dive into her past, she’s an unruly little girl who doesn’t take orders well and appears hopeless even as a pint-sized maid. She grows up exposed to a world that seems glamorous to outsiders, but is emotionally and physically abusive to those who live it. Try as she might to escape her fate—whether it be via actual attempts to flee or through the cultivation of a stubborn, rebellious attitude seemingly ill-suited to this world—Kiyoha continues to rise through the ranks as she matures, eventually becoming one of the most demanded courtesans.

Kiyoha’s progression throughout the book is natural and—even though she keeps her composure for the most part, making it seem as if she’s not as hard off as she really is—ultimately tragic. Life in the pleasure quarters is outwardly posh by necessity, but it’s a cycle of abuse that Anno deftly conveys. As much as Kiyoha tries to fight the notion of 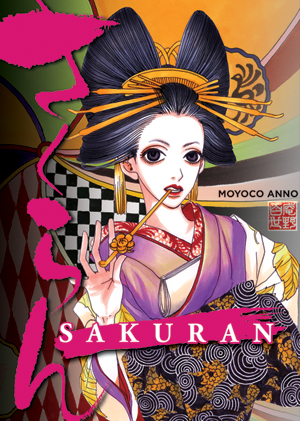 falling in love in this environment, she becomes infatuated with one man, further intensifying the pain of being stuck at the brothel, forced to service others while she waits for his eventual return. The bottom line: there’s only pain here, even in the pleasure.

It may sound like Sakuran is a downer, but it really is a beautiful book in many ways. As dire as Kiyoha’s situation can be, it is what it is, and she owns what she does. As with any good tale, there are ups and downs, and it’s tough to close the book before we see Kiyoha’s journey through to the end. Things seem a bit rushed as Sakuran barrels toward and through its final chapter or two, but maybe I just wanted a little bit more. Most of all it makes me want to seek out more of Moyoco Anno’s work. Sakuran is an appropriately gorgeous comic that garnishes an otherwise unsavory world.