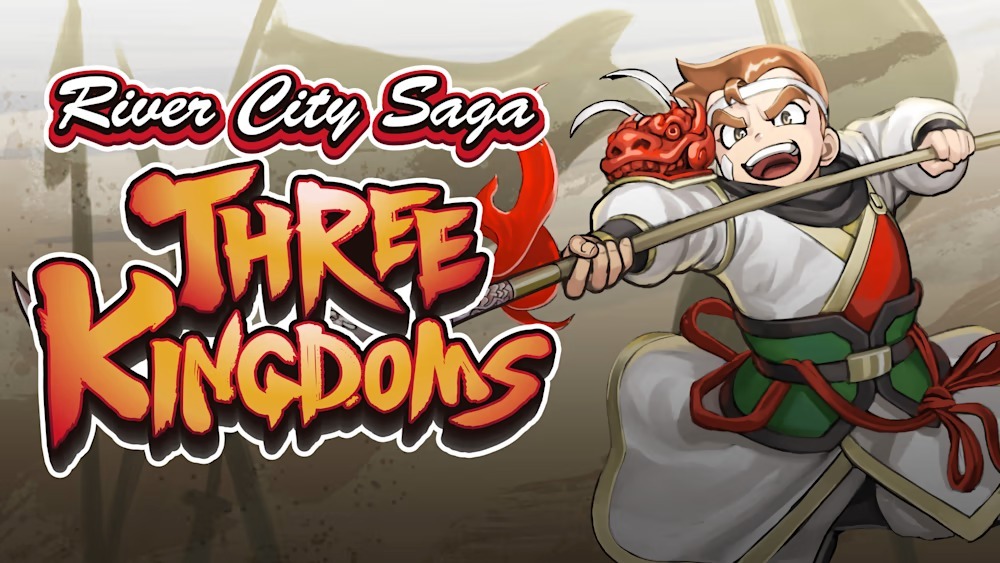 In Japan, the Kunio-kun series is a long-running, beloved series of beat ’em ups that have been around since the Famicom days, spawning numerous sequels and spinoffs in the decades since their debut. In the west the series gained most of its notoriety from River City Ransom—the localized NES version of Downtown Nekketsu Story that launched back in 1989—and while we’ve gotten some key entries since, it’s always nice to see Kunio-kun back on our screens in localized form. The latest entry takes many of the series’ characters back in time for a spirited spin on the Romance of the Three Kingdoms story in what is appropriately known as River City Saga: Three Kingdoms, and it’s definitely a punchy journey with memorable action and a delinquent twist on history.

The setup is as simple as any beat ’em up should be, but there’s way more meat to the story in Three Kingdoms. This one essentially plops Kunio-kun and the rest of the extended cast from the series right into the middle of a full-blown period piece, with Kunio-kun taking the lead as Guan Yu. Everyone else has their own correlating character—Gouda is Liu Bei, Godai is Zhang Fei, Sawaguchi is Zhang Bao, and so on—and those who are familiar with the Three Kingdoms saga will get the most out of their interactions and the sprawling story as a whole. In fact, the perfect player for River City Saga exists somewhere in the microscopic Venn Diagram of people who are well-versed in Kunio-kun lore and scholars of The Romance of the Three Kingdoms. It’s certainly a distinct place to find oneself. 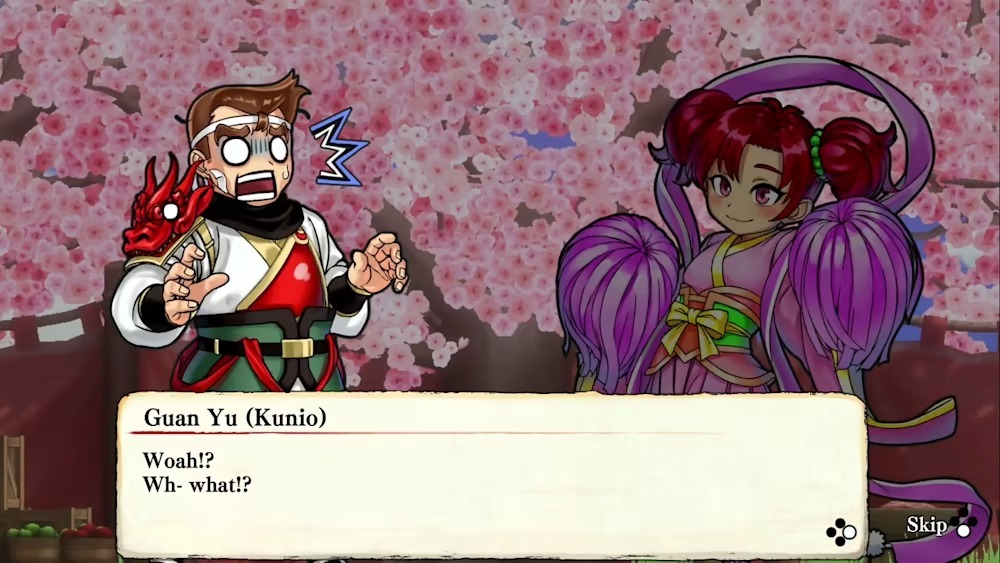 From there, much like the rest of the Kunio-kun series, you have a snappy mix of pure beat ’em up action and RPG-style progression. You can level up all of Kunio-kun’s core moves, learn new skills and tactical powers, and eventually grow to the point that you’ll be wiping the floor with the Musou-like hordes of enemies in devastating style. The story you’ll be battling through takes Kunio-kun from the Yellow Turban Rebellion to the Battle of Red Cliffs, ultimately filling up six meaty chapters with comedic dialogue and a sprawling spin on a time-honored tale.

This is all depicted through a mix of 3D and pixel art visuals. The side-scrolling environments are rendered in 3D, and every character atop it is styled after the classic River City Ransom/Kunio-kun sprites we’ve come to know and love over the years. For the most part the aesthetic works, though lining up characters precisely for both attacks and the occasional platforming section can be finicky. There’s nothing too demanding of the player in either regard, though, so it’s not much of a lasting concern. 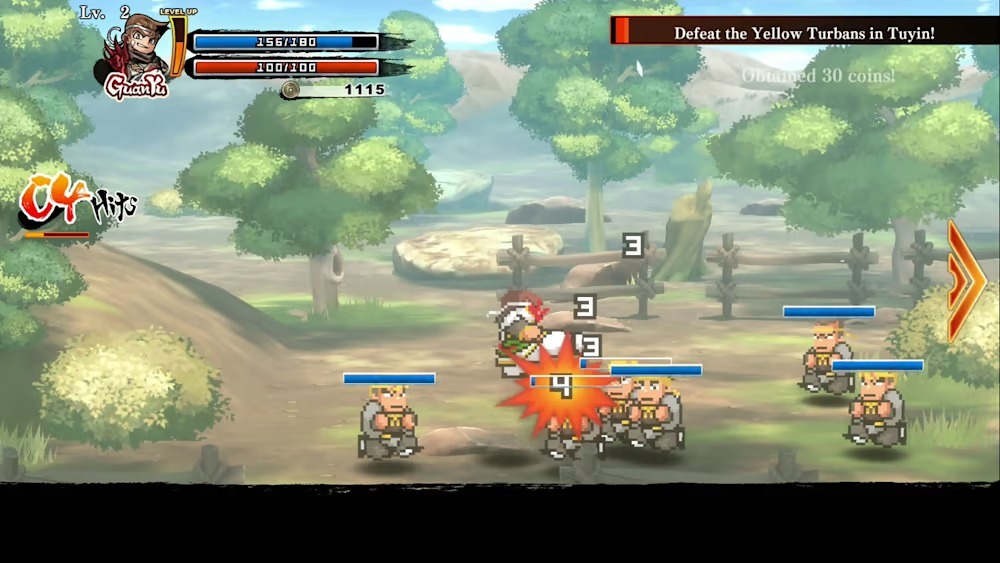 Combat in River City Saga is as involved as you want it to be. You can make it through the game with a fairly basic assortment of punch and kick commands and powers, or you can spend time purchasing all of the available scrolls to vary your arsenal to the fullest extent. Doing so can be rewarding, but the nature of the game means you’ll likely be better off finding one or two moves that work to clear out hordes quickly and stick to them throughout most of the story mode.

This holds especially true thanks to the fact that enemies are very quick to stun-lock Kunio-kun if he gets in too close at the wrong time. Once you approach a large group and get knocked down a few times, your only recourse is to roll back out and try it all over again. After you eventually unlock a punch that has more range, you’re not going to want to switch back to anything else. This can make combat a little repetitive, but unleashing special attacks that take out whole swaths of foes never gets old, so it has all the peaks and valleys one would expect from a traditional beat ’em up. 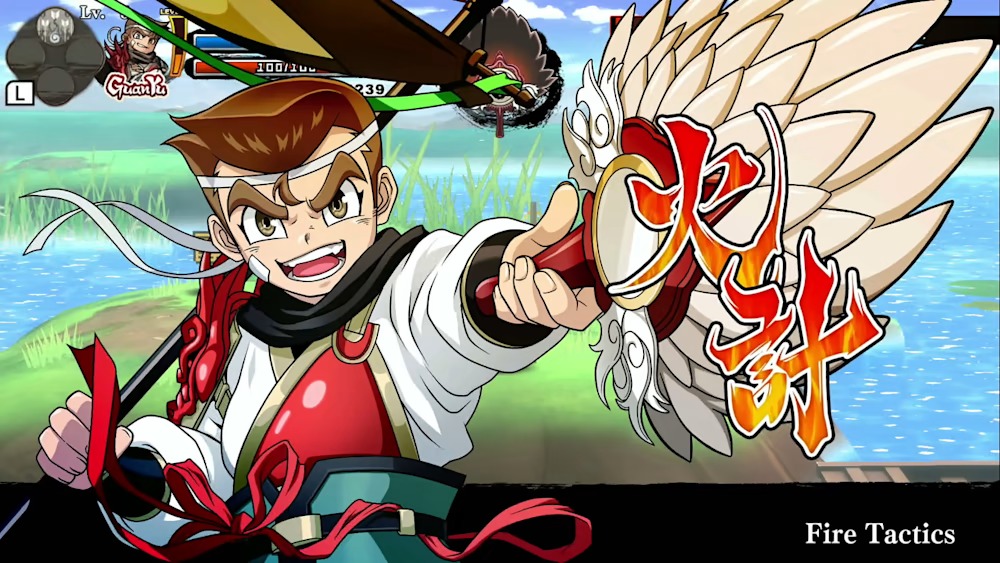 Thankfully, River City Saga doesn’t overstay its welcome. Its length is just about right, offering plenty of story and action over the course of six chapters but only demanding as much as you’re willing to put into it. Each chapter can be completed in a little over an hour or two if you don’t want to bother with side quests, but I found being thorough to be just as enjoyable without too hefty of an investment. Completing most of the optional missions along the way will all but ensure that you’re over-leveled for everything that comes after, but there’s more to dive into after the main game if you want an even beefier challenge.

There are certainly other retro-modern beat ’em ups to choose from at the moment, but if you find yourself anywhere near that aforementioned Venn Diagram, or even if you just happen to catch a nostalgic wave from the Kunio-kun aesthetic, River City Saga: Three Kingdoms is well worth your time.