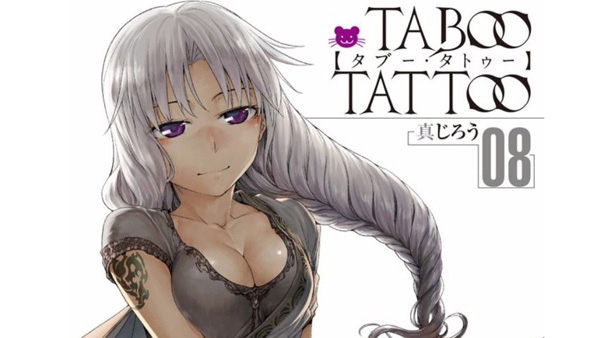 Occupying much the same place in the manga food chain as Demonizer Zilch, Taboo Tattoo also has hand-to-hand combat, occult conspiracies, and teenage dudes with massive destinies getting fawned over by superpowered girls. Seigi “Justice” Akatsuka is a boy who studies martial arts with his grandpa. When he saves a homeless man from thugs, the grateful drifter imprints him with a tattoo, which turns out to be a “spell crest” that grants its bearer incredible power.

We soon learn the crests are from Selenistan, a vaguely Nepal-esque South Asian nation which, in this parallel world, is the #2 power after the United States. The U.S. wants control over the spell crests (for the good of the whole world, of course), and Seigi soon meets and befriends their agent, the improbably named Army Lieutenant Bluesy Fluesy, whose crest powers have the side effect of making her look underage. While Touko, Seigi’s childhood friend, gets flustered over the mysterious new blond girl in Seigi’s life, the evil assassins of Selenistan hone in on Seigi’s magic, vowing to kill him and steal its power… 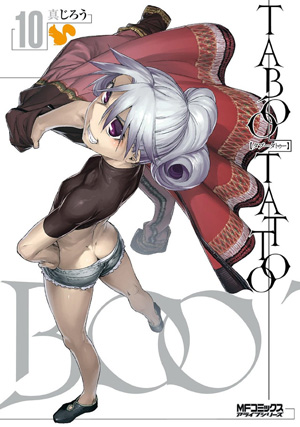 Decently drawn, with dynamic (if occasionally confusing) fight scenes and cool glimpses of creepy monsters, Taboo Tattoo is a shonen battle manga at heart. Like an old-fashioned manga hero, Seigi vows “I just want to be stronger!” and determinedly jumps into battle, even when he knows his opponent is too powerful and he’s already spitting up blood. The fights are sometimes cool, the spell crests too, with their gimmick of being activated by different “trigger substances.” (“Like Popeye!” Bluesy helpfully explains.)

Unfortunately, the story soon goes down dark paths, as women get felt up and threatened by sadistic bad guys; even if this didn’t seem out of place in what’s basically a superhero story, the adult content wouldn’t match the youthful art. What’s left is a fairly standard “dark” battle manga, sometimes interesting, more often exploitative, and not quite well drawn enough to read for the art, although I like the author’s end note explaining that in this world everyone speaks Esperanto.