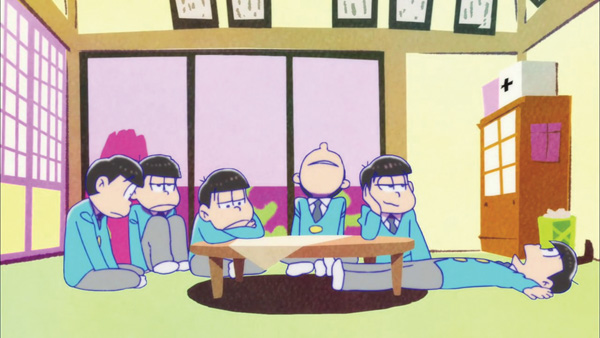 Mr. Osomatsu is a new update of Fujio Akatsuka’s 1960s comedy series Osomatsu-kun, made to celebrate Akatsuka’s 80th birthday. Reviving a classic series is always a challenge, introducing tension between respecting and maintaining the qualities of the original while also making something that’s accessible for an audience that likely had little to no exposure to the original and is accustomed to visuals and writing with different sensibilities than those of 50 years ago.

Studio Pierrot has done a fantastic job balancing these with Mr. Osomatsu. They retained Akatsuka’s distinctive, cartoony character designs and used the basic character and narrative framework, then used that as a launching pad to both adapt classic storylines and create gags that are entirely new. 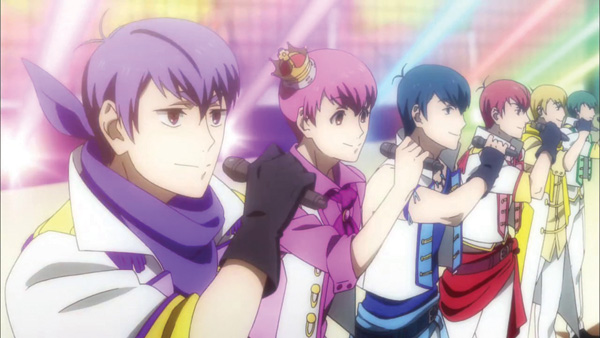 The basic framework of Mr. Osomatsu is simple: a set of sextuplets (Osomatsu, Karamatsu, Ichimatsu, Choromatsu, Jushimatsu, and Todomatsu) have various misadventures alongside their childhood friend and crush Totoko, buck-toothed con man Iyami, oden stall owner Chibita, and a few other odd characters. The sextuplets, originally in elementary school, have been aged up and are now good-for-nothing NEETs still living at home and mooching off their parents.

Each of the brothers has a distinct personality and these often clash, leading to a variety of disagreements and misunderstandings. Within that basic framework, the writers spin out a ton of outlandish, sometimes dark and frequently dirty, gags about everything from finding a job, to sex change drugs, to trying to promote a seafood-themed idol singer. 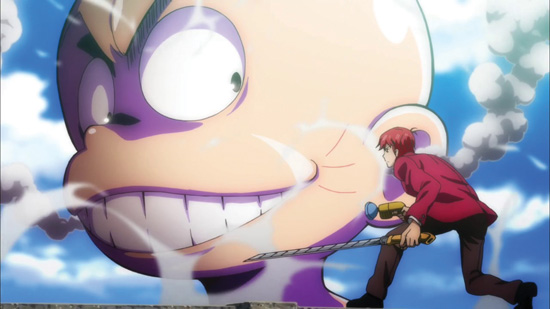 The very subject of updating an old series was the impetus for the very first episode of Mr. Osomatsu, mocking the idea of remaking the show into a modern moe sensibility, transforming the sextuplets into cool and sexy characters while Totoko becomes the winsome shojo heroine—an episode so mighty in its parodies of reverse-harem shows like Boys Over Flowers and Uta no Prince-sama that it was removed from the Internet and does not appear on the home video release.

While that episode may be gone, it lives on in several other amazing segments in future episodes. Given Mr. Osomatsu’s propensity for parodying other characters and properties, if not its tendency toward risqué humor, that episode hasn’t been the last bit of censorship directed at the show and I wouldn’t be surprised if we see more in the future. Hopefully cooler heads with an actual sense of humor will prevail, and the altered or chopped content will eventually be restored. 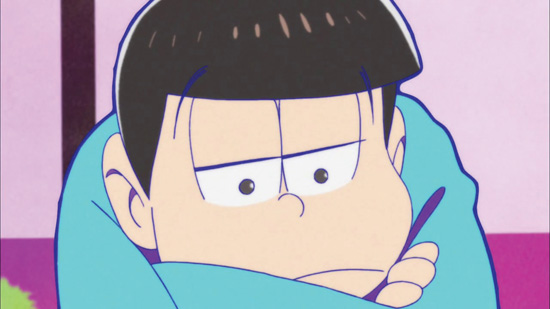 Pierrot’s approach certainly seems to have worked. I can’t honestly think of many other anime comedies that have made me laugh out loud as many times, or as often per episode, as this one. In Japan Mr. Osomatsu has been a hit, especially with female fans; the February issue of Animage magazine featuring the sextuplets sold out and required additional printings, the first to do so since 1980. This spectacular success perhaps goes to show that “old-fashioned” or distinctive character designs don’t have to be tossed out and homogenized to make something popular with current audiences.

A solid comedy foundation, great jokes, and colorful, expressive animation speak for themselves. It also speaks to the timeless quality of good comedy. Drawing inspiration from classic and enduring comedic actors like Charlie Chaplin and Buster Keaton, Fujio Akatsuka created characters and situations that continue to evoke laughter. Recommended.