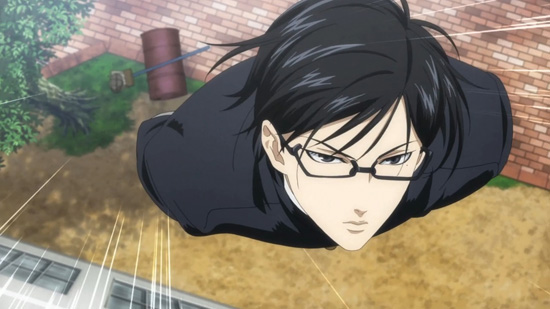 Haven’t You Heard? I’m Sakamoto, adapted from Nami Sano’s seinen manga, revolves around a handsome, aloof savant who exudes poise throughout even (and most notably during) the most mundane moments of everyday high school life with a style that simply cannot be, whether for jealousy and/or outright awe, denied. His name is Sakamoto. And if you haven’t heard of him yet, be prepared to become obsessed.

If not hooked by the goofy minimalism of the volleyball tossing in the cold open (or overjoyed in its variations), soon-to-be admirers are bound to be drawn in by the dramatically narrated, comic book-vibrant OP that features both a lounge-y intro and the pulse-quickening hard rock song “Coolest” by CustomiZ. It showcases short premise examples—Sakamoto doing various activities with his signature cool—and even sneaks in an homage to the cover of the manga’s first volume. If further convincing is needed to continue on with the series, the fluidity with which the first instance of Sakamoto’s ingenuity and its repercussions are animated will curl even the most cynical pair of lips into a chuckle-choking grin. 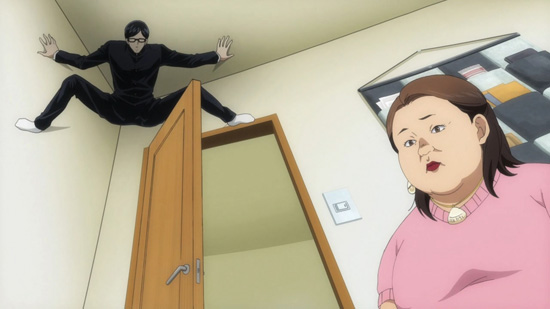 For being so dry—relying on the irony of the everyday being accomplished by a bishonen via dramatic flourish and rewarded, en masse, via utter veneration—this series proves to be as infinitely rewarding as it is repetitive. This is an achievement, especially so given that the source material would presumably serve a short format better; quick gags in short time slots tend to be easily digestible even if horrible. But the plotting in Sakamoto strings together multiple one-shot gags to build a rolling wave of funny. The best thing about that is the unexpectedness with which some random particularly commonplace action will be given the Sakamoto treatment; there always seems to be a surprise.

This type of farce seems suited for director Shinji Takamatsu, especially after his success with Cute High Earth Defense Club Love!, and Studio DEEN does a great job applying its honed experience gained via Meganebu! for animating Sakamoto’s beautifully bespectacled face (along with everything else). As important as the fluidity of Sakamoto’s movements is to portraying an absurd amount of grace, the freeze frames, done up like glamour shots of either Sakamoto or his efforts, also contribute to the sense of the overly dramatic. It’s not a show to be watched strictly for the animation, but its applications are used smartly to reap the utmost humor from the core concept. 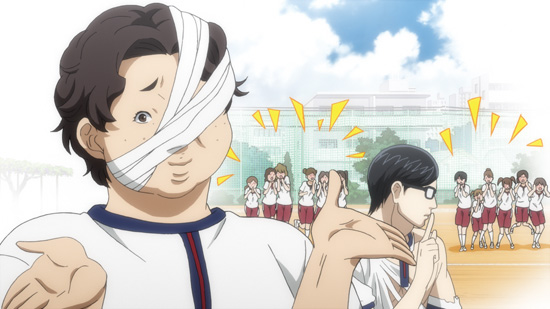 Even though it’s primarily to highlight Sakamoto’s handsomeness, another aspect to enjoy in this series is the character designs adapted by Atsuko Nakajima. Paunches, facial features drawn with depth and detail, and a wide variety of body types bring out a natural human ugliness in a show obsessed with beauty and style. (There’s a guy with a big belly who wears nothing but animal print shorts in class; it’s never explained and might just be my favorite visual aspect of that classroom.) The antagonists are always downright ugly, and everyone except Sakamoto is un-beautiful for some slight flaw or other. It’s a smart decision that bolsters the show’s premise.

While it’s not laugh-out-loud comedy, Haven’t You Heard? I’m Sakamoto is definitely a show to tune into if you need some levity in your life. It does a great job mocking society’s fixation on fashion and being cool via its absurd premise/main character and such well-used contrasts as character design and action vs. perception. (In one particular instance, Sakamoto performs an imitation that is downright hilarious only because he, as the coolest of the cool, is acting so embarrassingly.) It’s not a show to marathon, but it is one to make sure to watch all the way through.