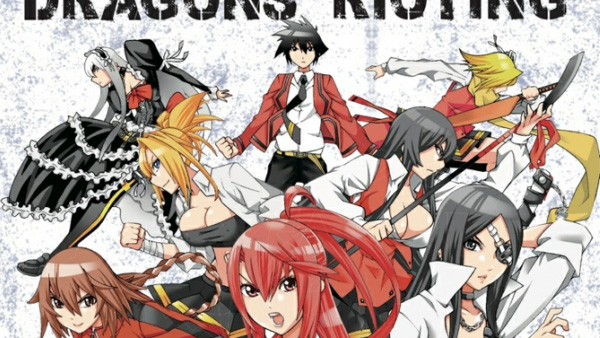 Wouldn’t you know it, it turns out to be a girls’ school that recently went co-ed, and the student body is made up almost entirely of hot girls with massive breasts spilling out of their unbuttoned uniforms. They’re also locked in a nonstop martial arts war for school supremacy, and Rintaro’s defensive skills, developed to dodge boobs, stand to turn the tide.

By now you probably can guess whether Dragons Rioting is in your wheelhouse. As convoluted as the setup is, it’s little more than a delivery device for T&A close-ups and 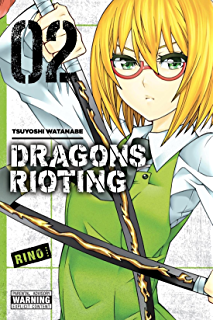 drawings of busty girls with their clothes ripping away. The fan service, starting with a little boy gawking at breasts covered in a substance readers will be either relieved or disappointed to realize is ice cream, is extreme (and tasteless) enough to earn the book its Mature rating despite no actual sex or nudity.

To the manga’s credit, every element is pushed just as outlandishly over the top. Rintaro’s musclebound martial-artist dad looks like he stepped out of an old Street Fighter game, the average female character has breasts at least the size of her head, and schoolyard brawls explode pavement and topple buildings. Rintaro, who’s even more impossibly super-strong than the three sexy “dragons” who run the school, has to use all his power to dodge the usual fate of the shonen manga protagonist: falling into cleavage. It’s a big, dumb, fun manga and for all but the thirstiest readers the humor will eventually wear thin, but at least it knows it’s big, dumb fun.