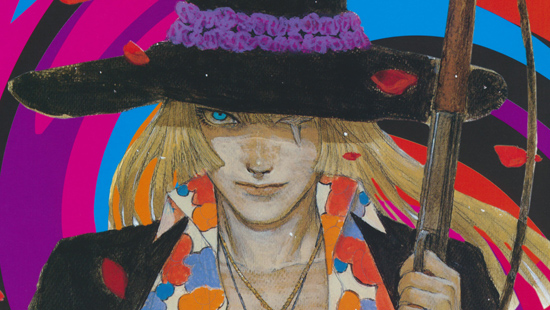 Hiroaki Samura has built his career on one seminal manga: the 30-volume samurai fantasy epic Blade of the Immortal, a cult hit in the US as well as in Japan. Launched in the early 90s, Blade ended just a few years ago, freeing Samura to move on to new projects and let it all hang out. And has he ever. 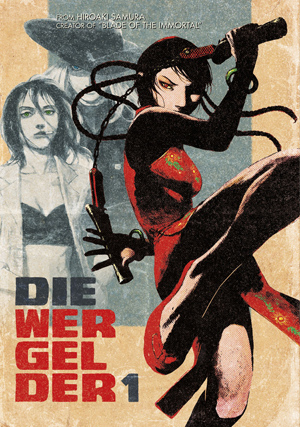 pornstaches, lots of brothels, and a bevy of ruthless yet stylish female assassins. Graphic violence, including (or maybe especially) sexual violence, abounds. At this point it may be more effective to simply transcribe the notes I took while reading the first two volumes:

• WHAT AM I SEEING SHE ROTATED HIS FACE

• seriously there is a woman in an evening dress and mask leading a man in underpants on a leash, like that is her basic going-to-the-stakeout look

The female cast includes Trane, a killer prostitute with one eye and a robot hand; Soli, the aforementioned perky torturer; Jie Mao, a kung-fu fighter in a cheongsam; and Shinobu, a “bad bitch drifter” who gets mixed up with the rest of them against her better judgment. The male cast is forgettable.

In his vastly entertaining endnotes, Samura says he was influenced by the grindhouse-like, female-driven Pinky Violence genre of films from the 1960s and 1970s, specifically “1970s Toei style, with a black-clad character on a quest for vengeance like Female Convict Scorpion.” Quentin Tarantino is also a big Pinky Violence fan, and Die Wergelder feels like a not-so-distant cousin of films like Kill Bill, with the same blend of genuine enthusiasm and winking self-awareness. 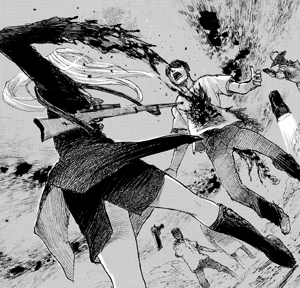 Meet the Fairy Tail Stage Play’s Gray Fullbuster
MAPPA: Boldly making anime nobody else would venture to make before