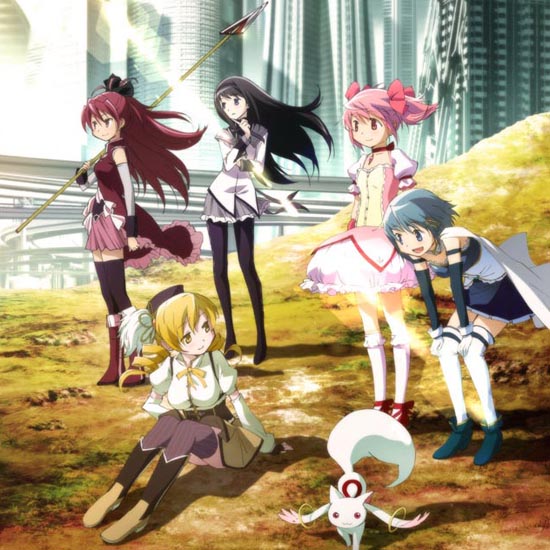 You know right from the start of Puella Magi Madoka Magica: Rebellion that something is terribly wrong, because everything is very, very right.

Puella Magi Madoka Magica, or “Mado-Magi” as it’s colloquially known, was one of the biggest anime sensations of 2011. Written by Gen Urobuchi (Fate/Zero) and directed by Akiyuki Shinbo (Motogatari series, Hidamari Sketch series), Madoka Magica is a seemingly innocent show about magical girls and their adventures, carrying on the traditions of Sailor Moon or Pretty Cure. But Madoka quickly gained a following once people began to pick up that it was not your average magical girls show.

(Fair warning: this review doesn’t spoil Rebellion, but touches on important points from the original series.) 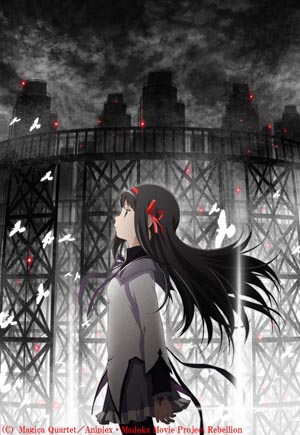 Puella Magi Madoka Magica: Rebellion, the new feature-length sequel, curiously doesn’t seem to pick up right where the series left off. The film starts with the five main characters of the TV series – Madoka, Homura, Mami, Sayaka, and Kyoko – happily living out their lives as magical girls, while balancing school, dating, and everything else in between. Despite their individual fates in the show, all of the girls are all alive and well, operating under the name “Puella Magi Holy Quintet,” battling “nightmares” (not “witches” like the show) and ridding the city from the evil that threatens to undermine the happiness of their friends and classmates. They each even have their own lengthy transformation and roll-call sequences that call to mind Super Sentai shows and Sailor Moon. It’s perfect, and it’s probably what Puella Magi Madoka Magica was supposed to be like, or at least what people expected it to be.

But anyone who knows the show will tell you that this is not Madoka Magica.

The big twist in Madoka Magica is that the magical girls themselves eventually become the very witches they are fighting; their souls are slowly corrupted in battle until finally they break and transform. We find out later on that this transformation releases a tremendous amount of energy into the universe, and is a necessary process for Kyubey – the white, and seemingly adorable cat-like creature who gives these girls their magical abilities – to harvest energy. Kyubey is revealed to be a part of a race called The Incubators, beings who control the energy and run the universe. Using this premise as a backdrop, the show was a unique attempt at deconstructing the magical genre, presenting series that was dour and serious despite its cutesy characters and colorful opening sequences.

While having a fairly dark storyline however, the series has a happy, neat, bow-tie ending; protagonist Madoka Kaname, after agonizing throughout the entire thirteen episode series about whether to become a magical girl or not and what she should wish for (each girl is granted a wish in exchange for giving their souls up for the cause), decides to sacrifice herself to save all magical girls, past and present, from their curse. She essentially rewrites the rules of the universe in a very Christ-like moment, so that magical girls no longer become witches, which was deemed a necessary evil. Time is shifted, universes are closed and opened, and ultimately the only one who vaguely still feels the existence of Madoka and remembers what has happened is Homura Akemi, the once unconfident and shy time-traveling magical girl who is saved by Madoka, and wishes nothing except for Madoka’s happiness. 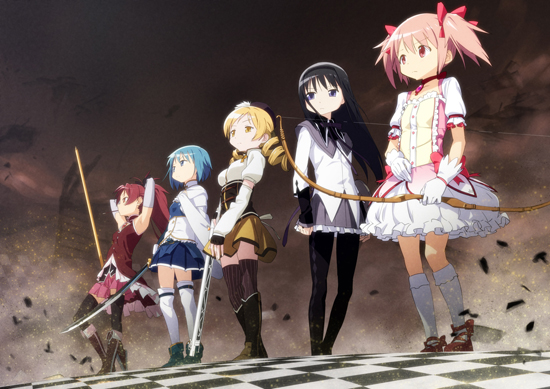 Rebellion takes place after this reassembly of the universe. In the film, Homura, hazily remembering her previous life, begins to realize that something is wrong; the world is too perfect, too complete. Being the stoic, justice-seeking righteous character that she is, Homura can’t leave these doubts alone, and begins to investigate.

The film has a lot of setup, particularly with the “perfect” new world. Many of the similar cues and scenes from the beginning of the TV show are reused, which fit the story’s overarching themes of time-traveling and parallel universes. Homura is reintroduced as the shy, glasses-wearing girl she is at the beginning of episode ten; the film only begins to pickup once Homura throws her glasses off and unties her hair, becoming the cold and serious character she is known as. But once she begins looking into the strangeness of the world around her, the film begins moving at breakneck speed, and the familiar ominous atmosphere returns.

Much like the tone of the TV series, the film jumps around rapidly, going from happy-go-lucky magical girls to depicting the end of the world. The film goes from Sailor Moon to The Avengers to The End of Evangelion within a span of two hours, and doesn’t even end there. Those who had a problem with the show’s ending being too neat will be pleased to find that Rebellion manages to shred that bow into tiny pieces, and then cobbles them back together again. 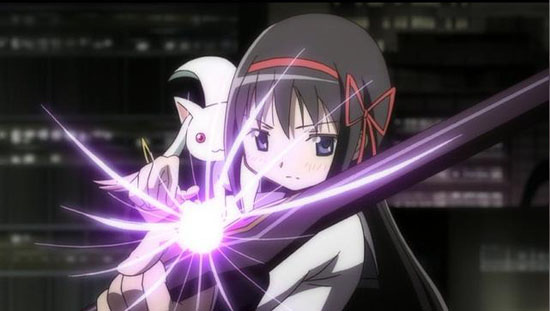 The big theme of the film is the lengths one will go through to be with someone, the fine narrow line that divides love and selflessness from selfishness, and perhaps even hate. With the idea that in order to have an all encompassing, unconditional love, there must ultimately be an equal balancing power, the film takes the ending of the TV series and turns it completely on its head. If the TV version of Madoka Magica was about God and unconditional love, the new film is about the Devil and how love, when taken too far, can turn into hate.

The animation Shaft have done here is also quite stunning. There’s a fight sequence between Mami and Homura in the middle of the film that is quite spectacular, with both using their expertise in firearms to try and upend the other. The result is a sequence that should have belonged in the Matrix sequels – two characters wildly firing their weapons while flying through the air, creating a shower of bullets, every shot predicted and read as the two carefully navigate the spaces between each shot. The transformation sequences of each of the girls are also beautiful, as are the witch environments, which were staples of the series. The climax of the film takes place in what can be seen as the ultimate witch vortex, and the animation here doesn’t disappoint. The witch environments shown in the TV series are fully realized here, with all the tricks and imagery honed from the show brought to life in full effect.

The popularity of Madoka Magica has been indisputable since it first aired in 2011. However, the show had yet to prove whether it was simply a trend or instead had its own place in the history of anime. Puella Magi Madoka Magica: Rebellion does just that. Much like The End of Evangelion, this film takes the expectations and preconceptions of what came before and elevates them, solidifying the property’s place in the canon of Japanese animation. Urobuchi and Shinbo have masterfully created a stunning resolution, which overthrows the conclusion of the TV series, and replaces it with something more logical, thought-provoking, and ultimately long-lasting.

This story originally ran in the 11/5/13 issue of the Otaku USA e-News
e-mail newsletter. If you’re not on the mailing list, then you’re reading it late!
Click here to join.