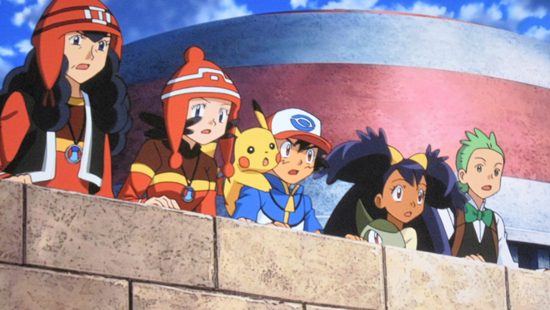 The 14th and 15th Pokémon movies came to the U.S. in English-dubbed editions in December 2011 after attaining the second and third spots in the ranking of the year’s domestic box office hits in Japan (beaten only by Studio Ghibli’s latest, From Up on Poppy Hill). Pokémon the Movie White: Victini and Zekrom was given single theatrical screenings at 388 theaters in the U.S. on the mornings of Saturday-Sunday December 3-4, while the companion movie, Pokémon the Movie Black: Victini and Reshiram, premiered on Cartoon Network on Saturday, December 10 at 7:00 PM (EST). The movies were released together as a double feature in Japan this past summer.

Pokémon the Movie White: Victini and Zekrom was the first Pokémon movie given a nationwide theatrical release in the U.S. since the fifth in the franchise, Pokémon Heroes, in 2003. As the oldest Pokémon fans among us may recall, the first three Pokémon movies were all given wide theatrical release by Warner Bros., after which the fourth and fifth movies were given a limited release by Miramax. All the subsequent ones went either straight to DVD or premiered first on Cartoon Network, although the 13th, Pokémon: Zoroark Master of Illusions, played theaters in malls in 14 cities in early 2011 as part of the “Pokémon Black and White” tour, an event that bypassed New York (and most big cities) entirely, thus depriving me of the chance to see it on the big screen.

I was lucky to be able to attend a screening of Pokémon the Movie White: Victini and Zekrom at a Bronx multiplex on the morning of Saturday, December 3. I’d seen no advertising for the showing in any of the newspapers, nor was there a poster visible anywhere in the theater. I’d only learned about it from a thread on the DVD Talk web forum. Cartoon Network runs Pokémon Black and White several times a week, yet the broadcast of the new episode a week earlier, on Saturday, November 26, offered no commercials for the theatrical event. If the distributor, Cinedigm Entertainment, wanted to keep it a secret, they sure worked hard at it. There were about 30 people at the screening, a mix of parents and kids. 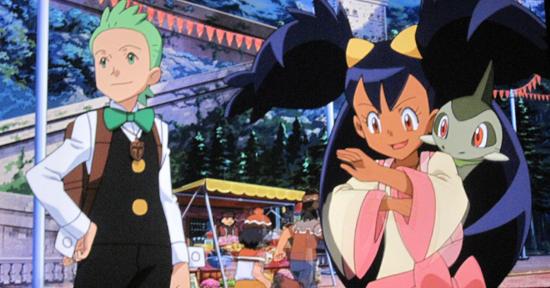 The movie is a real big screen adventure, with a plot that owes more than a little to Hayao Miyazaki’s classic, Laputa: Castle in the Sky (1986). The central element here is a floating castle that rises up from a mountain peak in a region that most reminded me of the Andes mountain range in South America. The key character here is a young man named Damon, a descendant of the “People of the Vale” who’d ruled the region a thousand years earlier and whose kingdom had been split up by a devastating war between two princes, each of which controlled a competing dragon Pokémon, a black one called Zekrom and a white one called Reshiram. Legend has it that the old king had used his magic, aided by a powerful little psychic Pokémon named Victini, to lift the castle up from the war-torn area and float it to the mountain peak where it’s currently situated. Damon wants to move it back to its original home and restore the Kingdom of the Vale. When our regular hero, Ash Ketchum, shows up with his companions in the mountaintop town of Eindoak, built in the shadow of the castle, to participate in a local festival and have a few Pokémon battles, he encounters the elusive Victini and coaxes it into public view for the first time in a thousand years. When Damon gets wind of this, he captures Victini and uses its power to harness the “pillars of protection,” which acted as a barrier to keep Victini from leaving, and lift the castle up to move it.

There’s a lot of exposition in the first half-hour as we get the whole story about the history of the castle and its people. Thankfully, it’s broken up by cute interactions with the adorable little Victini, who is lured out into the open by some cookies that Ash’s traveling companion Cilan, a Pokémon Connoisseur and master chef, has prepared. Once the action shifts to the castle and it starts to move, with all the central characters deposited there, the narrative kicks into gear for a solid hour of adventure and suspense as Ash and company, allied with Damon’s mother and sister, seek to stop Damon from exploiting Victini so heartlessly. Damon has revived Reshiram, which does his bidding, forcing Ash to revive Zekrom to oppose Reshiram, resulting in explosive battles in the sky between the two dragon Pokémon who were once allies. Eventually, they all learn that the Castle’s removal from the mountaintop has unleashed the Earth’s “Dragon Force,” which threatens to wreak havoc and destroy the world. Only then does Damon see the extent of his error and try to make amends. As the castle rises into the outer atmosphere, Ash is stuck there, having refused to leave without Victini, and he soon finds himself in serious danger. It all adds up to quite a compelling and exciting spectacle, with a strong emotional core provided by the deep bond formed between Ash and Victini.

The film is filled with the kind of spectacular visual imagery that has enhanced just about all of the last several Pokémon movies (dating, I’d say, from Pokémon Heroes, with its Venice-inspired production design). There are lots of elaborate special effects depicting the harnessing of Victini’s power and the powering of the pillars of protection as they propel the castle through the sky. There are also impressive shots of the purple dragon force raging out of control on the earth, seen from both aerial views and ground-level shots. (There’s one great sequence of the wild Pokémon being flushed out of their forest habitat by the dragon force, echoing the shots of Bambi and his friends fleeing the forest fire in Walt Disney’s Bambi.) In addition, there are breathtaking landscape shots showing the ancient town of Eindoak situated on mountain tops and cliffs, as well as plenty of shots of the town’s streets and public plazas with views of the surrounding countryside. The castle’s massive interiors are beautifully designed and laid out as well. 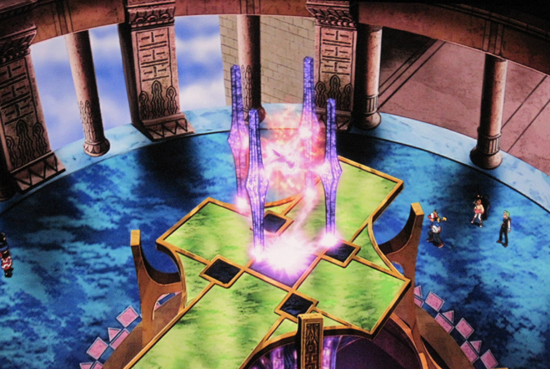 Ash is accompanied by Iris and Cilan, his companions from the current Pokémon season, Pokémon Black and White. Iris is a budding Pokémon Coordinator (a glorified choreographer), and she’s as sassy as Misty ever was, making for the kind of amusing tension that’s been missing from the series for a long time. Cilan, the older male on the trip, is dressed like a waiter at a fancy restaurant and is much more sophisticated and self-controlled than Brock ever was. He couches everything in cooking and foodie terms. (The adjective “metrosexual” comes to mind.) He strikes me as the kind of unavailable guy Jessie from Team Rocket would be attracted to (or even James, for that matter, for all you longtime Pokémon fans out there who remember his cross-dressing). Ash’s allies in this movie include Juanita and Carlita, Damon’s mother and sister, and the mayor of Eindoak. As usual in these movies, the three members of Team Rocket—Jessie, James, and Meowth—appear on the periphery of the action and never even get noticed by anyone else in the movie.

The audience at the theater I was in applauded the movie afterwards. I spoke to 11-year-old Bryant Garcia and his mother, Anna, who both heaped praise on the movie. Bryant declared it the best of the Pokémon movies he’d seen and the first he’d seen in a theater. (He would have been three years old at the time of the last theatrical screening of a Pokémon movie in New York.) He said it was “well animated” and a “good family movie.” He’d heard about it only on the Pokémon website. His mother thought it had a “good storyline” and a positive message about “true friendship.” She pointed out that Damon wasn’t a true villain, but was someone who “thought he was doing good.” 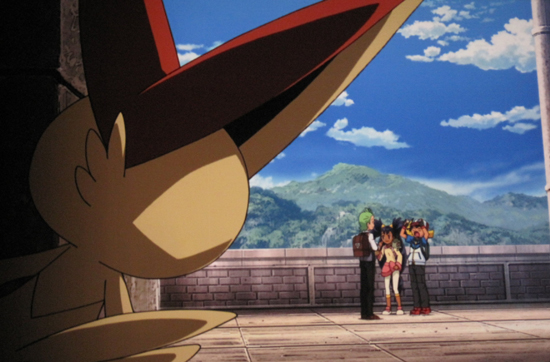 I happen to think that the Pokémon movies are among the finest animated adventures for children I’ve ever seen and it’s always troubled me that, after the first three movies, they got so little respect from critics, publicists, and distributors in America. (And even from anime buffs, for that matter.)

I watched Pokémon the Movie Black: Victini and Reshiram when it ran on the Cartoon Network on Saturday, December 10. It was broken up by nine commercial breaks, so this wasn’t the ideal way to first experience it. However, after a completely new prologue with an arctic setting, it’s virtually the same movie as Pokémon the Movie White, except that Zekrom and Reshiram reverse their roles. Zekrom works for Damon in this one, while Reshiram is revived by Ash. Also, the other Pokémon working for Damon (hench-Pokémon? Henchmon?) are different in this version. Aside from those scenes, though, all the footage is pretty much the same. You’re basically seeing the same screenplay but with two of the “actors” switching roles and alternate cast members in some smaller parts. I was puzzled by this and couldn’t grasp the rationale of releasing both movies together on a double bill, as was done in Japan. There isn’t enough appreciably different material in the second movie to justify sitting through it again right away. However, I imagine the second was the one more Americans saw this month (since so few got to see the first movie in theaters), so I’m guessing this will be the one that’s best remembered in the U.S., whereas those who saw the first one in theaters on the big screen will remember that one most. Either way, it’s always an occasion for celebration whenever a new Pokémon movie gets released here, no matter what version you see.