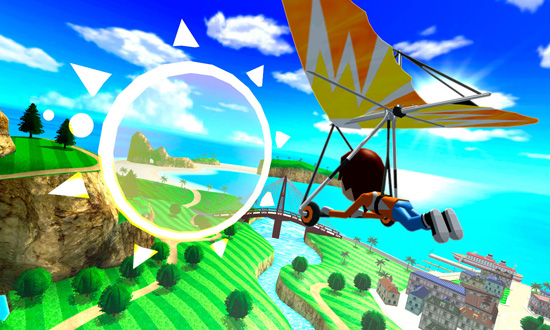 Flashing back to Pilotwings 64 seemed like a great way to kick off the 3DS experience. But wait, remember when the Nintendo 64 was considered 3D graphics? How will we ever learn to distinguish sooo late 20th century vs. eye-popping? I’ll just go ahead and propose threeeeee deeeeeee as opposed to 3D. 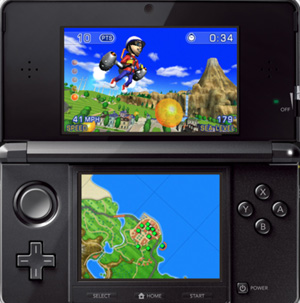 Something else I remember about the N64, and specifically about Pilotwings 64, was that I had no patience for Mission mode; mainly I just enjoyed flying around the island, taking in the environment, which was pretty impressive for the time. Unfortunately the same can and can’t be said of threeeeee deeeeeee. Not only were most of the missions a pain, but the more of the (less impressive, really, since we’ve come to expect as much or greater) view I took in, the closer I was to flicking the visual effects switch off. To tell the truth, I usually did after a few minutes. Even if it wasn’t necessarily hurting my eyes—although I can’t say it didn’t; at times, the constant adjusting to find that sweet spot of stereoscopic focus was distracting while, you know, trying to herd baby UFOs.

Each of the three vehicles come with their own challenges. The airplane controls are most straightforward, and target shooting is even sort of fun, but be careful not to bank into a tree while trying to ace a trick ring. The rocket belt has both the putziest controls (in an Asteroids kind of way, although using L to break sometimes helps mitigate the momentum mess you often find yourself in) and the concern of fuel to deal with. You might think the hang-glider would be the most relaxing, and it is, until you have to worry about drafting up to a certain height, among other chores. 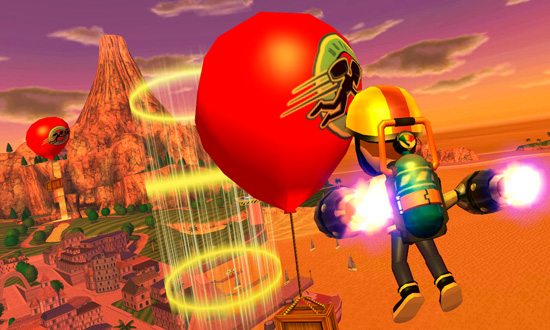 Upping your performance in Mission mode earns stars to unlock more missions, but also upgraded forms of your vehicles that are available in Free Flight Mode, as well. Unfortunately, Free Flight is littered with collectibles, making it similar to any other level of the game. There is also nothing free about it since it ends (unlike Pilotwings 64‘s Birdman mode) unless you pay your way into more time by popping white balloons. 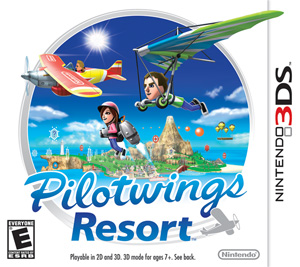 It would have been ideal to simply enjoy the feeling of breezy flight, especially with the title being Pilotwings Resort, but this game wants you to be more productive than that. If your competitive spirit extends to tweaking the angle of your hang-glider’s nose in a thermal current, the missions are the perfect length for a bus ride, but if you want to play in threeeeee deeeeeee, the bouncing and jostling will unfortunately not work out to your eyesight or performance’s advantage. Don’t let them sell you this one on nostalgia alone.