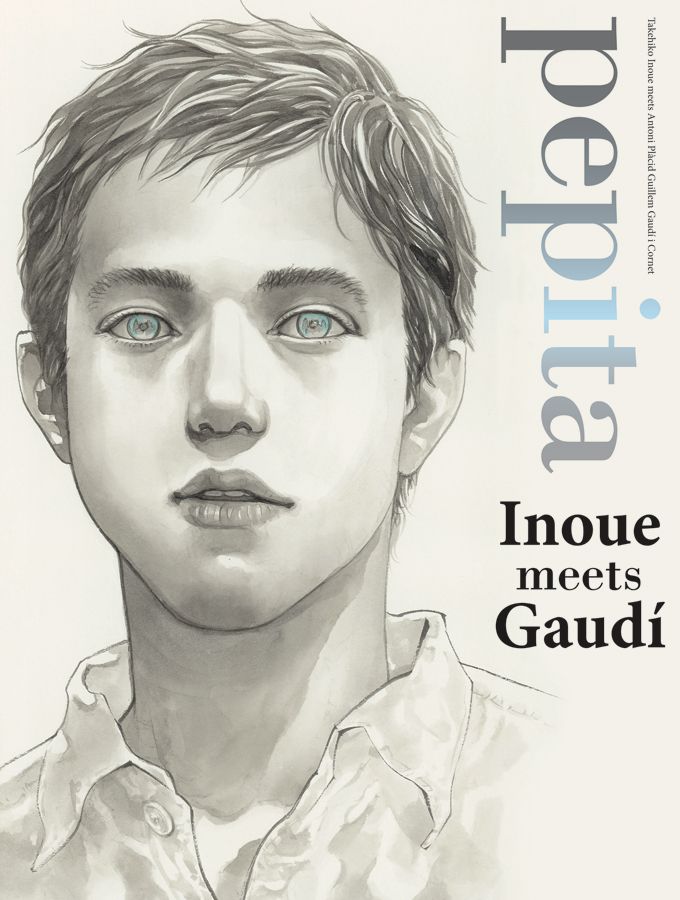 Pepita is a mixture of genres and mediums: art, history, philosophy, photography. While it is written by mangaka Takehiko Inoue (Vagabond, Slam Dunk), it’s not a manga. Inoue expresses his thoughts and stories in many different ways in this book, but never in the paneled comic book format.

The first page of the book explains what’s going on: In 1992, Inoue traveled to Barcelona and saw the work of architect Antoni Gaudí firsthand. He thought it was strange and didn’t seem all that impressed. However, by 2011, he was devoted to Gaudí’s work and wanted to follow in his footsteps.

This book, which is a large hardcover that reads left to right, is something of a travelogue and a history book dedicated to Gaudí. While it isn’t a straightforward biography, I did learn a lot about Gaudí while reading it. I also learned about Inoue, because he would put himself in the book. Sometimes we see pictures of him at places that involved the architect’s life. Some of the most interesting parts were pages that were basically prose poems. Inoue would wax especially philosophical on these pages, and in the book he talks about his own beliefs on such things as the natural world, art and human nature.

The photographs are gorgeous, making anyone want to visit the buildings and landscapes being shown. The style of art varies, from vague sketches to really detailed pieces. There is something intimate about this book, like a journal where Inoue jots down facts on Gaudí, sketches what touches him, and puts his own thoughts on paper. He gives us concrete details and then also muses about Gaudí’s life.

Pepita literally means “fruit seed” and was the nickname of Josefa Moreu, a woman Gaudí loved. Inoue explains, “[Pepita] is the name of this book, which is a search for the pepita of creation. It’s also a book about Gaudí’s longings and aspirations.”

Truthfully, Pepita isn’t an easy book to classify. I think fans of Gaudí and Inoue, as well as devotees of architecture, would get the most out of it. In that way it’s a niche read, but Inoue’s search for meaning is universal, and that part can touch anyone.  The beautiful visuals—both Inoue’s art and the photographs taken—also hold universal appeal. There is something very Japanese-feeling about the philosophy, and all in all this is a fascinating read.