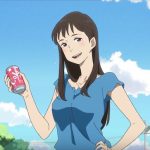 Based on a book by Tomihiko Morimi—the author who brought us the likes of The Tatami Galaxy and The Eccentric Family—comes Penguin Highway. The anime film adaptation will be the first feature-length work from Studio Colorido (Typhoon Noruda), and it’s officially set to open in Japanese theaters this August.

Hiroyasu Ishida directs the film, with Makoto Ueda on the screenplay, Yojira Arai on character designs, and Umitaro Abe on music. The lead roles go to Kana Kita as Aoyama-kun and Yū Aoi as Onee-san.

The story of Penguin Highway follows Aoyama-kun, a studious fourth-grader who writes everything he learns in his notebooks and is on good terms with local dental clinic worker “Onee-san.” Things begin to get strange when Aoyama-kun spots a penguin in the middle of his town, and they only get weirder when he sees a can of cola turn into a penguin after Onee-san tosses it away.