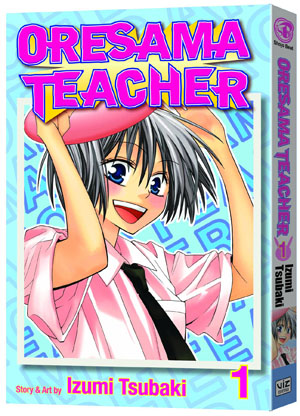 Mafuyu has a real talent for fighting. Unfortunately for her, her mother doesn’t consider it a talent and even threatens to disown Mafuyu if this sort of behavior continues. Then Mafuyu gets shipped off to a boarding school known for taking in delinquents.

Does this set her straight? Nope. It just opens up a new can of worms.

She gets in a fight there the night before school starts, despite what she’s been told. Hey, she sees a man getting beaten up and goes to rescue him.  Understandable, right? But the next day she’s shocked to learn that the man she rescued is her homeroom teacher, Mr. Saeki.

But wait, there’s more. When Mafuyu was a little girl, she had a crush on an older neighbor boy. And, conveniently enough, the neighbor grew up and is now the aforementioned homeroom teacher.

With this premise happening, it’s easy to assume that we’re going to have a teacher/student relationship going on, and I don’t mean the mentoring kind. The teacher even acts suggestively sometimes, making it seem as if he wants to get things romantic. However, Mafuyu firmly rejects him, despite any earlier crushes. So it feels as if it probably won’t be a teacher/student story, although I can only say probably. There are still some implications that, if the teacher changes, things might happen. There’s another boy named Hayasaka (also a delinquent) who’s in class with Mafuyu and who’s gotten her attention. Perhaps she’ll end up dating him instead. As of the first volume, neither guy is thrilling.

I don’t know what to make of the teacher so far. He can be a real creep, but he has some redeeming moments, and Mafuyu used to like him. That counts for something, right? He invites himself to stay in Mafuyu’s dorm for the night, which sounds very implicative, but nothing happens. He does cook for her, though, after seeing her dismal skills in the kitchen. He also wants her to be more personable and call him by his first name. He doesn’t always act very professional (hint: read above), but other times he does seem like a good teacher. Mafuyu herself comments on his rapid changes of personality. While he isn’t revealed as the neighbor until partway through, it’s pretty obvious from the start. The book does end with something mysterious going on, so perhaps the point and plot of Oresama Teacher will become more clear as the series continues.

It is a little hard to know what to think of Oresama Teacher. It doesn’t get off to a terrific start, but it isn’t bad, either. It’s a series that may gain strength as it goes on, yet it’s too early to tell. Ending it with a mystery was a good thing, because while the first volume wasn’t tight enough to make people rush for the next, it does make a second volume worth checking out. From there we can see how things will pan out, because I can see it going either way.