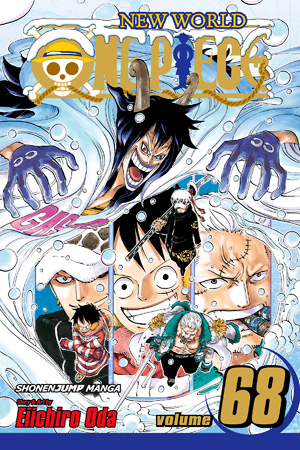 I never planned on reviewing every volume of One Piece, and obviously that hasn’t changed, despite the fact that we also covered volume 67. Every now and then I can’t help but chew the fat about Eiichiro Oda’s seemingly neverending saga, mostly because it manages to be a consistently fun comic reading experience after all these years. At over 700 chapters it’s still surprising, and the characters grow more charming by the volume. Whenever it does come to an end, it’s likely we’ll all have something very special to reflect upon.

But that’s FOREVER away, right? That’s why we’re here jammin’ about volume 68, which continues the Punk Hazard arc in which the villainous Caesar Clown is just about ready to broadcast a test of his gassy weapon of mass destruction, Land of the Dead, to potential buyers across the world. in this instance the weapon starts out as a bubbling gelatinous blob, but it’s just one of the many threats looming on the hot and cold island of Punk Hazard.

Half of Luffy’s crew have had their bodies switched with one another thanks to Trafalgar Law, whose presence in Caesar’s lab is part of a much more devious and wide-reaching plan. This is where the majority of the humor comes from in these chapters, because, naturally, Sanji is happily stuck inside Nami’s body, much to her helpless dismay. Despite Law’s nebulous level of trustworthiness, Luffy doesn’t hesitate to partner up with him in an effort to capture Caesar—in part because of all the children held prisoner in the lab, but also probably because it sounds like a total blast. 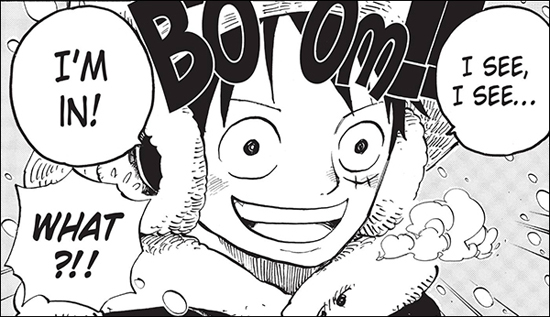 As usual, most of Luffy’s fellow crew members are aghast at how quickly he agrees to partner up with Law, but that’s what makes One Piece such a great series. The characters are all so vividly realized, from their own grand ambitions down to the slightest tick that separates them from the rest of the Straw Hats. Oda knows that Luffy wouldn’t even think twice about such a major decision, and it’s immediately clear that not only does he not know what the partnership entails, he doesn’t even really care. If it sounds like it has potential for thrills and adventure, Luffy’s in, and even his enemies, or those lurking somewhere in the grey area, hold some kind of bizarre respect for his reckless nature.

It all comes down to sincerity. The Punk Hazard arc—which in my experience has been much more enjoyable to return to in collected form than it was week-to-week in Viz’s digital Shonen Jump—continues to show growth among the cast while staying true to what makes each member unique. The action hits fast and there always seems to be a dozen things going on at once, but as always the fun that was had creating it comes across clearly from page to page. As much as I can’t wait to see what happens next, I have a feeling Oda and his characters are even more excited to tell me about it than I am to read it, and that’s exactly how it should be.