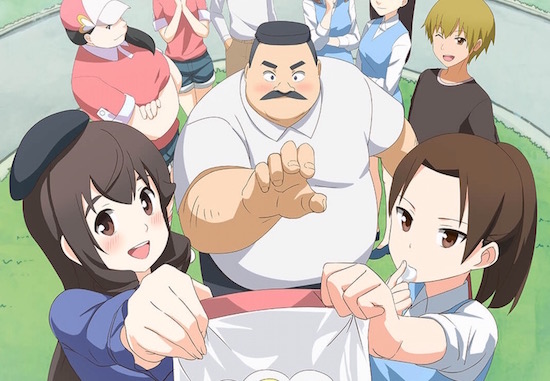 Ojiisan and Marshmallow is the cutest little anime to come out of last season. Based on the manga by Rekomaru Otoi, the show follows Iori Wakabayashi as she tries to get a date with her co-worker Habahiro Hige, an oblivious man in his thirties with an obsession with marshmallows.

I can hardly imagine an art style better suited to a show that revolves around marshmallows. Everything in this show is soft and light, just like the marshmallows our protagonist’s object of affection is obsessed with. It’s very easy on the eyes and just looking at it gives you a nice sweet and warm feeling. It’s definitely a huge improvement compared to the art of the source material.

The episodes are about two and a half minutes each but that doesn’t hurt the show at all. Aside from a two-part story that wrapped up the season, each episode is able to get a full—but short—story in that time. I’m actually surprised that they were able to do this so well in the time allotted. Individual episodes often had to navigate multiple settings and characters. The easy way would have been to treat the show like a minimalistic four panel gag comic, but the team behind Ojiisan and Marshmallow went above and beyond. It was able to pack in a good amount of quality content in a timeframe shorter than it takes to listen to a song.

The comedy in this show is pretty solid. Most of it is built on the simple conflict of Wakabayashi’s very overt attempts at flirting being met with Hige’s total cluelessness. It also brings a lot more characters into the mix, like the marshmallow factory employees who look at Hige like a mystical fairy from his pure love of the tiny white dessert.

Ojiisan and Marshmallow is a great show about love and marshmallows. It’s well-constructed so that it’s able to fit a lot into two and a half minutes. It’s definitely one of the winter season’s gems. Altogether it will take you about a half hour to watch through the whole season, so it won’t take long to enjoy it all.

Ojiisan and Marshmallow is currently streaming on Crunchyroll.