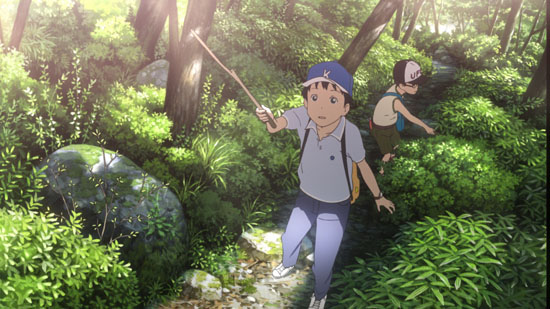 The 2011 New York International Children’s Film Festival offered U.S. premieres of two Japanese animated features from 2010—Welcome to the Space Show and Time of Eve, both shown via digital projection in Japanese with English subtitles. One is a whimsical children’s journey through a surreal, heavily populated galaxy, while the other is a quiet, contemplative meditation on human-android relations.

Welcome to the Space Show was directed by Koji Masunari (Read or Die), and focuses on five children and their wild adventures in space after rescuing what they think is an injured dog but who turns out to be an alien named Pochi. The children, aged 7 to 14, reside in a Japanese farm town and had been left alone for a week at school in the town’s rather quaint notion of summer camp. Pochi speaks Japanese to the kids and winds up taking them with him into space, first to the moon, where a thriving intergalactic outpost has been built on the dark side, complete with a gigantic mall that serves “space burgers,” and then to different spots throughout the galaxy, including his hometown on Planet Bow, which is populated with a race of intelligent dog-like beings, who all live in homes and communities that strongly resemble those on Earth. 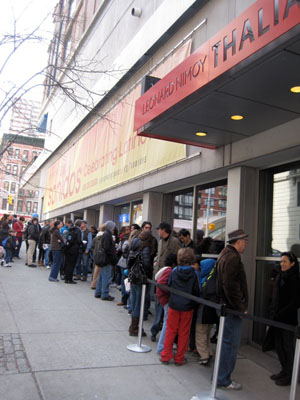 The plot, which gets increasingly complicated as it goes along, has to do with the quest by various shady space characters for an extinct herb called Zughaan, which happens to grow on Earth where it is known as wasabi! One of the girls on the trip, seven-year-old Amane, lives on a farm where wasabi is grown and her adolescent cousin, Natsuki, who’s visiting for the summer, just happens to have brought a supply of it on their journey, which comes in handy when hard currency is needed. The whole thing is set against a backdrop of a weekly television extravaganza called “The Space Show,” which is broadcast throughout the galaxy, except, of course, on Earth. Amane is eventually kidnapped by the bad guys and placed as an imprisoned Princess character on the show, while Natsuki musters up the courage to be the heroine she’s always dreamed of to try to rescue her cousin in full view of the entire galactic viewership.

The film starts out in an idyllic, pastoral farm setting, with echoes of My Neighbor Totoro and Mai Mai Miracle, and quickly moves to developed outposts in space and on different planets, with a welter of alien types, including a big, gentle woodchuck-type alien named Goba, and a cute alien girl named Ink with odd appendages, both of whom offer crucial aid to the Earth children at different points. The places they go often seem like huge amusement parks, with only Planet Bow providing an actual settled community. They travel in assorted craft, including an organic-looking train that recalls Galaxy Express 999. The concept of the children entering a completely alien setting to battle the dominant creature there recalls the climactic action in both Summer Wars and Oblivion Island, two of the three Japanese animated features that played at last year’s NYICFF along with the aforementioned Mai Mai Miracle. There’s also a heavy dose of Spirited Away, particularly in the scenes where the five children have to work to pay for their passage. (Interestingly, both Summer Wars and Welcome to the Space Show involve adolescent heroines named Natsuki on summer vacation in rural Japan.)

At 136 minutes, it was long for a children’s film (longer by 20 minutes than Summer Wars). Given that it was in Japanese with subtitles, I was surprised to see so many parents at the screening with children much too young to read the titles. Many of the kids got bored and restless during the film, given its length and the fact that the focus was on way too many characters, allowing poor Amane, the key audience identification figure for the children, to get overshadowed for much of the time. It was also filled with increasingly abstract settings and imagery. Had it been shorter and the emphasis placed more firmly on Pochi and Amane, I think it would have worked almost as well for the audience as Summer Wars, which was also packed with abstract elements, but managed to maintain its focus and keep a strong anchor in the real world. Still, as Japanese children’s animated features go, it’s pretty spectacular and is worth showing to precocious anime fans, ages 7 and up, the ages recommended for this film by NYICFF. 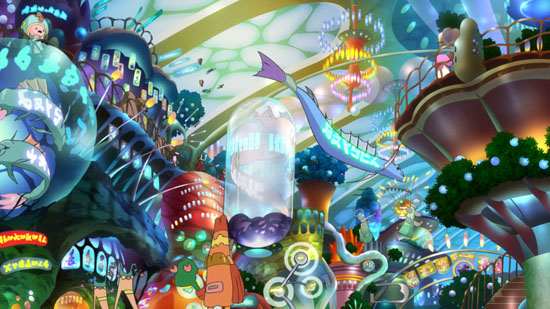 Time of Eve, directed by Yasuhiro Yoshiura (a maker of short animated films), is recommended for ages 11 and up and the audience was, I’m happy to say, more heavily populated with appreciative adolescent and teen viewers. The film began as a series that played out on the web in six installments on Crunchyroll.com from 2008 to 2009. The first 15-minute segment ran at last year’s NYICFF. What we saw this year was a compilation of all six episodes edited into a 106-minute film. It’s a story imagining life in a near-future society where people depend on android servants who are exact human replicas except for the electronic ring of light that appears right over their heads. The protagonist, a high school boy named Rikuo, has a “houseroid” named Sammy, a young woman android in professional dress, and he becomes curious about her whereabouts during a period when she’s unaccountable to him. He finds a café called “Time of Eve,” which sports the motto, in English, “Are you enjoying the time of Eve?” and displays a strict rule forbidding discrimination between robots and humans. By visiting this café and meeting its employees and regular patrons, Rikuo and his best friend, Masaki, whose father sits on the anti-robot Ethics Committee, gradually explore what it means to be an android.

Most of the action takes place in the café, with side trips to the lead characters’ apartments and classrooms and a hearing held by the Ethics Committee. We meet a number of intriguing characters at the café, including a kindly old man and a playful young girl; an evasive couple having a tryst; and a mysterious man who calls Masaki “Blade Runner.” None of them are quite what they seem, as we learn only gradually through the steep learning curve of stubborn young Rikuo’s point-of-view. There’s an amusing encounter at the café with a clunky older model household robot, all shaky metal parts, cables and joints, who’s trying gamely to convince everyone he’s human. Rikuo’s budding awareness of the different levels of Sammy’s “personality” and her capacity for curiosity and learning, is the main story for much of the film, but then the drama shifts to Masaki and his childhood relationship with a much older model of household robot, THX, dubbed “Tex” by Masaki, and the trauma that resulted when Tex stopped speaking to him. 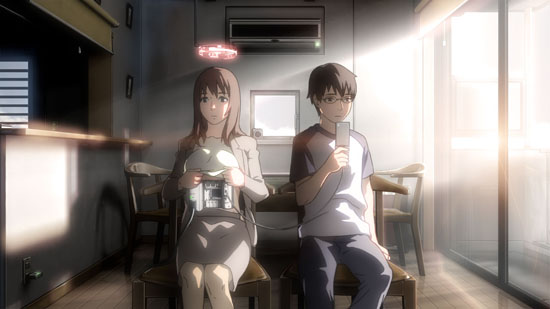 It’s all an attempt to deal with the time-honored science fiction theme of human-robot relations in the form of a drama, rather than an action film or high-tech sci-fi thriller. It can get ponderous at times, and the Masaki-Tex flashback/reunion subplot causes the whole thing to devolve into a heavy-handed “Can’t we all just get along?” message that left me thinking how much better this sort of thing was handled in episodes of Astro Boy some 40-odd years ago. There’s also a whole back story conveyed by drawings seen under the end credits, with an entire fully animated coda sequence following the end credits featuring characters from the drawings supposedly explaining something referenced earlier. Hopefully, keener minds than mine in the audience had picked up the necessary clues that enabled one to decode this ending.

Still, it’s a noteworthy accomplishment for an animator to take this particular theme and give it a thoughtful dramatic treatment, without feeling the need to inject it with violent action or sci-fi spectacle of any sort. In fact, given the fact that so much of it is dialogue-driven drama confined to interior settings, it’s not inconceivable to imagine this redone as a stage play. To students interested in anime dealing with human-android interactions, particularly romantic relations, Time of Eve certainly deserves to be studied alongside such titles as Dragon Ball Z, Armitage III, Ghost in the Shell, Chobits, and Mahoromatic, to name just a few. In addition to the explicit reference to Ridley Scott’s groundbreaking science fiction classic, Blade Runner (1982)—about humans and “replicants,” based on a Philip K. Dick story—there are references to other notable science fiction treatments of the theme, including Isaac Asimov’s laws of robotics, as outlined in his book, I, Robot, and references to other Japanese animated treatments of the subject.

The screenings were held at the Leonard Nimoy Thalia in Manhattan, a completely renovated space where once stood the original Thalia Theater, the longtime preeminent repertory theater in New York, which used to hold animation screenings on a regular basis. It was there, almost thirty years ago, that I saw two of my earliest anime features on the big screen, Osamu Tezuka’s Phoenix 2772 and the movie version of Galaxy Express 999. So it all comes full circle.