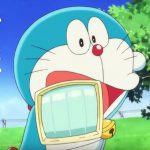 The next Doraemon anime film is Doraemon the Movie: Nobita’s Treasure Island, and it features a theme song by Gen Hoshino. The movie’s website shared the title of the song—which is simply called “Doraemon”—and took the opportunity to sample the theme in the latest trailer.

Gen Hoshino’s “Doraemon” single is set to ship in Japan on February 28. In the meantime, sample a portion of it in the promo below ahead of the 38th Doraemon film’s March 3 Japanese opening.