Though you may not know it by title alone, because Konami have elected to drop “Contra” from the title all together, giving it an identity that will click with a niche audience while perhaps opening itself up to a new one with no prior affection for the series. Those of you that fall into that smaller audience might remember where the Hard Corps moniker comes from. That would be Contra: Hard Corps, originally released in 1994 on Sega Genesis.

While it was similar on a surface level to the Contra entries that came before it, Hard Corps always felt more like a Treasure-developed game, with an emphasis on multiple paths, wacky/wild boss encounters, and a very strange sense of humor. Hard Corps: Uprising takes it into sequel territory, putting the player in the shoes of Colonel Bahamut, the first game’s primary antagonist. 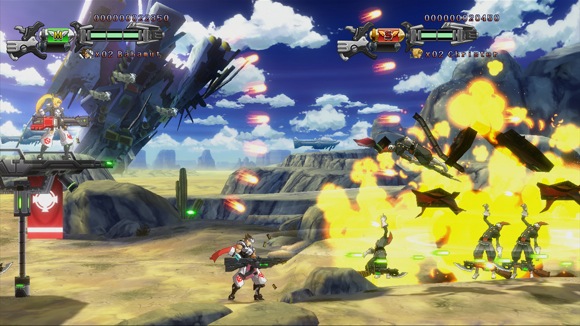 Uprising is also, interestingly enough, being developed by Arc System Works, who have been most well known as developer and publisher of BlazBlue and the Guilty Gear series. Perhaps that means the above screenshot is indicative of the game placing high-res sprites atop a 3D backdrop; it’s tough to tell. We’ll find out how they handle the series when the game drops as DLC on both Xbox Live and Playstation Network, though as of right now that release date is unknown.

Taking a Shrine on Character
Hana no Keiji