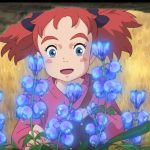 When Marnie Was There director Hiromasa Yonebayashi’s Mary and the Witch’s Flower is coming to select theaters in the United States on January 19, right after a special Fathom screening event on January 18.

Based on the 1971 children’s novel The Little Broomstick, Mary and the Witch’s Flower is the debut film from Studio Ponoc, which was founded by two-time Academy Award-nominated producer Yoshiaki Nishimura (The Tale of The Princess Kaguya, When Marnie Was There). Ahead of its U.S. premiere, check out the new English trailer below.

Mary is a plain, young girl, stuck in a rural British village with her Great-Aunt Charlotte and seemingly no adventures or friends in sight. But a chance encounter with a pair of mysterious cats leads Mary into the nearby forest, where she finds an old broom stuck in the overgrowth of a nearby tree, and the strange blue glow of the fly-by-night flower, a rare plant that blossoms only once every seven years. As the broom comes to life and lifts Mary high into the skies, she discovers a mysterious school for witches above the clouds. But the charming headmistress Madam Mumblechook and bumbling Doctor Dee are not all that they appear, in a twisting tale that reveals even the most ordinary-seeming children are capable of the most extraordinary adventures.