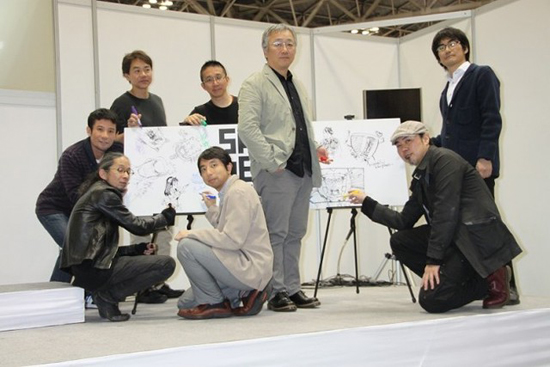 The internets have been awash in a slew of announcements and trailers for new anime films the last few weeks. For your convenience (and possible hype overload), dear readers, we’ve collected them for you here.

This ain’t Otomo’s first omnibus film: he also produced the seminal 1995 film Memories, and if Short Peace is half as good as that one was, prepare to get your socks rocked. Short Peace hits theaters in Japan on July 20th.

What: The Portrait Studio and Sonny Boy & Dewdrop Girl

Who: Takashi Nakamura and Hiroyasu Ishida

Why We’re Excited: These two films, apparently being primed for a double-feature style release, are the creations of two pretty talented gentlemen. Nakamura is an industry veteran, who worked on classics like Akira and Nausicaa and directed 2001’s A Tree of Palme. Ishida is a relative newcomer, best known for his 2009 short Fumiko’s Confession, a viral hit and a seriously impressive piece of animation for a university student.

The trailer reveals precious little footage from the new films, but what’s there looks pretty great. Expect these to hit the film festival circuit soon.

Why We’re Excited: By far the most esoteric of the projects we’re highlighting, Wonder is the creation of experimental animator Mirai Mizue, well-known on the film festival circuit. Mirai drew 24 frames (one second) of animation per day over the course of a year, ending on April 1st (no foolin’).

Fans of the project were invited to send in their names to be featured in the film on a special day of their choosing (a birthday or anniversary, for example). Overall, 625 people participated, cheering on Mirai, who’s no doubt happy to finally give his drawing hand a break.