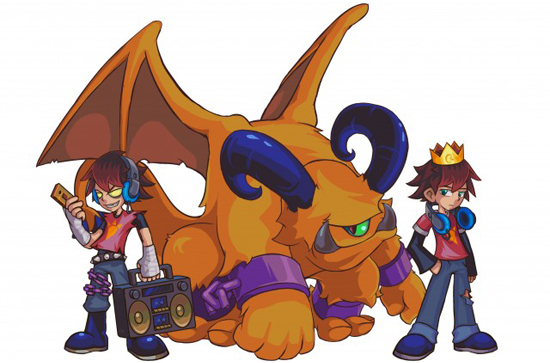 It’s extremely difficult to look at Monster Tale as anything but the direct successor to the half-platformer, half-puzzler, Henry Hatsworth in the Puzzling Adventure. To be fair, the creators didn’t make it easy for us by leaving Electronic Arts after that project to develop it. Trade old man Henry for a spunky blue-haired girl called Ellie, swap his robot with an evolving monster sidekick, find another creative use of the Nintendo DS’s two screens; that’s the plan.

After coming upon a mysterious wrist band and being transported to another world, Ellie makes friends with a creature she names Chomp. For some reason other kids who have made their way to this place have not been so kind to their monster pals and chose to enslave them rather than work together. Ellie’s main goal is to get home, but along the way she helps the others to see (by kicking their asses in boss fights) the error of their ways.

The path to “savior” of this monster and kid society is one that wraps back on itself more times than preferred. In standard Metroidvania type exploration, progressing requires unlocking Ellie’s various moves (e.g. melee attack, wall jump, charge shot), but luckily remembering where you saw that ledge that used to be too high, or that funky looking red barrier, is not a problem due to a pretty hand-holdy map complete with glowing objective marker. It becomes interesting (and maddening) later, then, when one of the challenges near the end of the game is navigating an area designed specifically to mess with your ability to read the map. 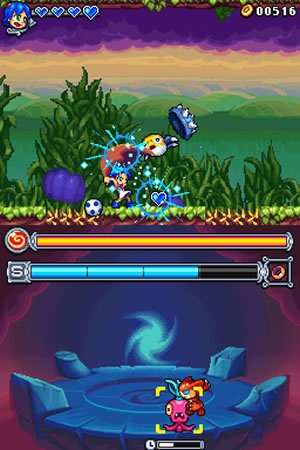 Despite the abundant platforming, combat flows in an almost beat-’em-up way. Chaining combo strikes to get more gems and items is half the fun. You may think Ellie herself would be interested in an ice cream cone, book, soccer ball, etc when they drop, but she contents herself with purchasing upgrades for both attack strength and efficiency at the store and sends all these items straight to Chomp’s cave on the bottom screen. Here, he eats or investigates to extract stat upgrades and experience, leading to evolution of his both his abilities and physical appearance.

Chomp is about as complicated as you want to make him. He had 24 forms when I cleared the game, but I hadn’t even unlocked all of them yet. Some forms reflect the attack affinities (fire, water, earth) while some heal or defend Ellie. Once you master a special move or trait (Chomp stat bonuses) through experience, they can be used in any form, though, so by the end of the game you can practically choose based on looks or base stats (like speed) alone. Presumably you gain better experience for taking advantage of each form’s hobbies (jumping rope, reading) with appropriate items, but if it seems putzy, you don’t need to bother.

This fact makes the game both accessible and a little disappointing. Once I had my combo of healing and search and destroy water bombs, maybe I wasn’t making the most of the rock-paper-scissors effect, but I could still win. Chomp seemed to level pretty consistently although I never bought him any extra items at the store, and it’s not like there is a way to save items for a specific form, since he will just be immediately attracted to whatever is lying around in his cave at any given time. I wish that going the hardcore micro-manager route if you wanted to had a little more robustness to support it.

Since it’s so hard not to compare Monster Tale to Henry Hatsworth in the Puzzling Adventure (down to grinding for coins on occasion), I was hoping the bottom screen would have been more engaging. The puzzle game was so addicting in Hatsworth, but here I just let Chomp mostly do his own thing. Not that I was sad he could heal his health there automatically, and now and then there would be an enemy that would fall down for him to beat up, but there wasn’t a hook to keep you bouncing back and forth outside of plain necessity.

As far as production values go, everything is Hatsworth-level quality or better. Even if the music gets a little stale as you run through each area for the umpteenth time, the classic beauty of the 2D graphics carries you through whether the speakers are on or off. I also noticed the controls are tightened up a bit from Hatsworth, a welcome change even if they made him a little clunky on purpose because he’s old. 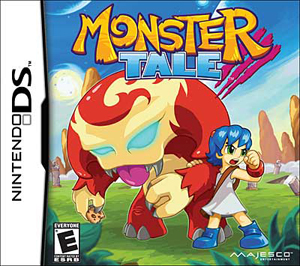 The generic title and old gen make it easy to overlook, but Monster Tale is a solid, fun, action-beat’em-up-platformer-rpg experience, perfect for those bemoaning a sparse 3DS launch line-up or those who know how to make the best of their regular DS. It’s also probably worth keeping an eye on DreamRift—if they keep riffing on the genre-mashing theme while finding more cool raisons d’être for the lower screen, I’ll keep playing!