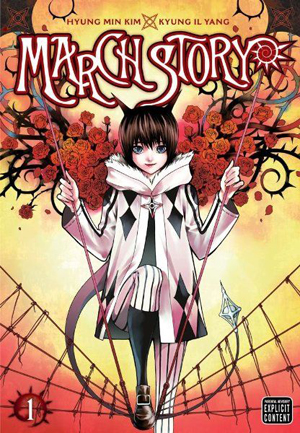 March Story has a simple title and a cover illustration that looks sweet and flowery, as if it could be aimed at younger readers. Don’t be mistaken. This is a dark, hypnotic and complex manga. In fact, it has gruesome enough images to earn it that little box on the front that says, “Parental Advisory Explicit Content.”

But there might be another question on your mind. What’s with the Korean names? Both the author and the illustrator are Korean, albeit this graphic novel was serialized in Japan. It reads right-to-left and its artwork has a mix of manhwa and manga characteristics. At any rate, the artwork is impressive, going from horrific gore to comical ugliness to all that is pretty and fancy.

The very first page shows a murder scene. But this isn’t any ordinary murder. It’s the work of a demon called an Ill. The Ill live inside objects, like earrings or masks, and can take over the bodies of people who come into contact with them. Intense, negative emotions in people bring out the Ill. The people are then demonically possessed: horns come out of their heads and they no longer have control over their own actions. The demons use their bodies to kill loved ones and cause untold havoc and destruction.

That’s why there are hunters who go after the Ill. One of these hunters is March, whose own relationship with an Ill makes things all the more dangerous.

The first volume has four interconnected stories. In each one March comes across a new Ill that needs to be destroyed. The first story, which sets everything up, has March come into contact with an insecure girl who works as a clown. Her low self-esteem makes her perfect prey for the Ill and before long she’s grown horns and is attempting to kill her father.

If the first story is the setup, then everything is going strong by the second story. In fact, it’s a bittersweet tale of love that shows March Story is more than just a run-of-the-mill horror tale. March Story has heart.

The third story, then, has both drama and humor. More is revealed about March (shh, I can’t tell you what) but it changes the pace of the manga for the better. This time a child is possessed by an Ill, yet this is more of a quirky, odd Ill. For a while, at least, the manga deals with humorous issues.

The fourth and final story in this volume takes you back to how March got onto the path of being a hunter. As a child, March lived under the rule of an evil woman who bathed in the blood of maidens, reminiscent of Elizabeth Bathory legends. The woman is after March’s older sister and here we have some of the most gory and torturous parts of the book.

March Story isn’t one of those examples of something that’s all horror and no plot. Far from it. Though it has images that might turn some people’s stomachs, it also shows why other people can enjoy horror stories: because it shows the intensity of people’s dark thoughts and desires.