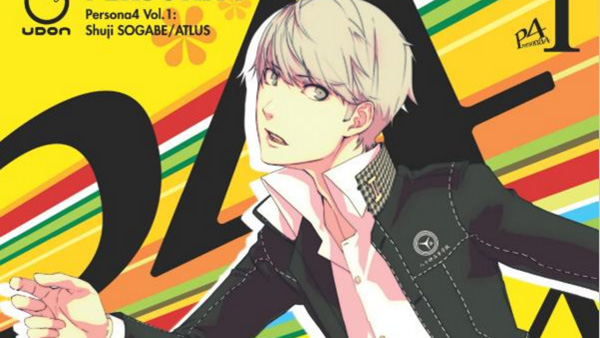 As they did for the previous entry in the franchise, Atlus recruited Shuji Sogabe to handle the manga adaptation of Persona 4, the latest in the Persona RPG series. The manga is a retelling of the game’s central plot rather than a spinoff or collection of shorts, so readers who haven’t played the game can safely pick this one up.

If you’re one of those readers, here’s the gist. His parents out of the country on business, Soji Seta gets shipped out to the boonies to live with his uncle. Shortly after he arrives in the sleepy little town of Inaba, a series of strange murders begin. There seems to be a connection with an urban legend about the Midnight Channel, which claims that if you stare at a blank TV at midnight when it’s rainy, you’ll see your soulmate. Soji and his classmates discover that people are showing up on the Midnight Channel before disappearing and showing up dead; even more bizarre, Soji has the ability to go through the television screen into another world, where people’s inner demons come to life with potentially deadly consequences. The only way to defeat these Shadows is with the power of a Persona, a manifestation of one’s inner strength. Can Soji and his new friends rescue people from the TV world before they’re murdered, and find the killer? 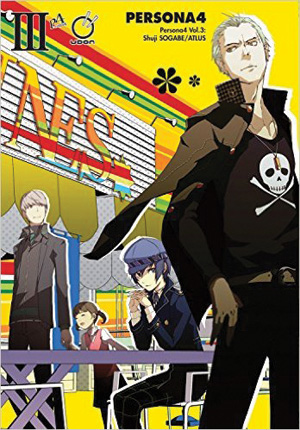 It’s easy to see why Sogabe was chosen to work on this: his art is clean and attractive, competently translating Shigenori Soejima’s original character designs. (Sadly, given the grayscale manga format, the bold colors so key to the game’s aesthetic get lost in translation.) The manga is perhaps a bit workmanlike, but it reads smoothly and Sogabe summons up some interesting and dynamic paneling in moments of dramatic tension. Probably the biggest sticking point is when it comes to action scenes. The art is still attractive, but the sequences feel disjointed—a group of pretty pictures rather than a clear flow of movement. The emphasis here is absolutely on plot and character interaction more than Persona battles.

Persona 4 is a fairly lengthy RPG, with quite a bit of side quests and characters; for the manga, everything has to be condensed into a focused narrative, meaning things necessarily get cut. To help offset this, Sogabe provides readers with a more direct window into characters’ thoughts and feelings. As someone who’s played the game, this is most noticeable with Soji, whose status as player interface made him a bit of a cipher. Here, we get a bit more of a feeling for Soji as a person, which is a nice touch. If you’ve played P4, the manga offers a bit more time with its lovable band of dorks; if you haven’t, this is a decent overview of the plot and characters (but I’d still recommend playing the full game).