While the second volume of Haruko Kumota’s Descending Stories manga delves more deeply into Yakumo’s tragic past and so into more sensitive psychological territory than the first volume did, it still retains the coarse emotional framework that gave that opening volume its lively character. Moved by a heartfelt plea from Kyoji (himself propelled by sage advice from Konatsu), the icy rakugo master recounts the tale of how he was abandoned by his mother, how he and fellow orphan Sukeroku were taken in by the former Yakumo, and how they first entered the world of rakugo. Even as Japan tumbles through World War II and reconstruction, the two adopted siblings (then known by the respective zenza monikers Kikuhiko and Hatsutaro) devote themselves to their art entirely. “My life was so peaceful it was hard to believe there ever was a war,” the present-day Yakumo muses, and he may well be referring to the story as a whole. 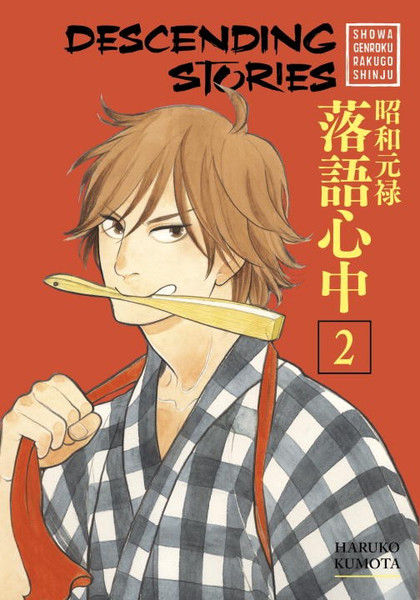 For the world of Descending Stories is so lackadaisical that it’s hard to believe any conflict could exist in it. Yakumo was abandoned, yes, but when he is able to experience catharsis thanks to a simple line from Sukeroku – much as Kyoji was able to come to a revelation about his passions and discover his talent after a simple pep talk  – no emotional distress feels it could ever be permanent. Even Yakumo and Sukeroku’s friendship here is so brimming with goodwill and jovial competition that the idea their friendship will end in tragedy seems contrived. Tragedy simply does not feel native to this world. Only when Kumota delves further into the frustrations, the inadequacies and the fears that Yakumo feels as an aspiring artist does she sound real psychological depths, but the effects are so powerful that, when she does pull them off, it’s difficult to think these contrasts may not all be by design.

How hard it is for the would-be artists not to see something of themselves in Yakumo when his mentor warns him that he’s not improving at all as a performer despite all the time he’s put in. How hard it is not to feel his frustration as his master chides him for being too perfect. And how impossible it must be not to feel something of Yakumo’s own jealousy towards Sukeroku, who believes in him so entirely and yet comes by his own talent with so little effort. Because the truth is that all but the luckiest and the laziest of aspiring artists knows how thankless, how fraught is the process of development. An apprentice spends hours upon hours day after day honing her craft and still she goes to sleep knowing what progress she’s made might be measured in millimeters. A trainee works for years developing a single minor work and looks up to find himself still in the shadow of his heroes’ mammoth masterworks.

Talent is no guarantee of genius, either: a novice might possess encyclopedic knowledge of the craft and an impeccable technique and the undying praise of their teachers, and still a lifetime might pass without his ever discovering a voice of his own or anything worth saying. Because all art is personal, there is no one path to mastery, which makes even the best of guidance from the most earnest mentor only guesswork. And so to aspire to genius is to exist in a state of doubts so deep and so pervasive that the sensitive novice feels them as existential tremors. When your life is one devoted to work, that work in turn becomes the measure of your worth.

If this seems strikingly, disgustingly apolitical given the larger context of the story, it is also absolutely appropriate that the man now known as Yakumo should remember these years so narrowly. Abandoned as a child because of a leg injury that prevented him from dancing – and so made him a liability for his mother, a geisha – he was adopted only because of his potential to inherit a legacy. Sukeroku may have seen rakugo as his birthright, but for Yakumo, it was only a burden he was forced to carry by dent of his existing at all. Even the only names he’s ever had have been given to him because of his success in rakugo. Yakumo has nothing but his art. It his identity entire. So it is no mistake that he should have lived out this turbulent era unconcerned with the larger context, nor that he should remember it only in such personal terms.

Nor is it a mistake that Kumota would choose to present this era with such a limited focus. Yes,   the artist who does not engage with his social context is poorer for it. But so much of craft requires time and solitude and quiet. It requires us to investigate those aspects of ourselves we rightly hide away and to dissect what we think best in us. It demands that we unflinchingly observe our ugliest desires, critically deconstruct our best impulses, wrestle with every element of ourselves. Artists who do not face this down can only produce cynical bilge or reassuring lies. And yet still this is no guarantee of success. Nothing ever is. Which is why this second volume of the Descending Stories manga works well even if imperfect: Kumota has tapped into a deep vain of discontent concerning identity no artist can mistake. The fact that the world surrounding these internal struggles is so peaceful, so lovely, does not invalidate it, but, rather, makes its inevitable rupture all the more upsetting. 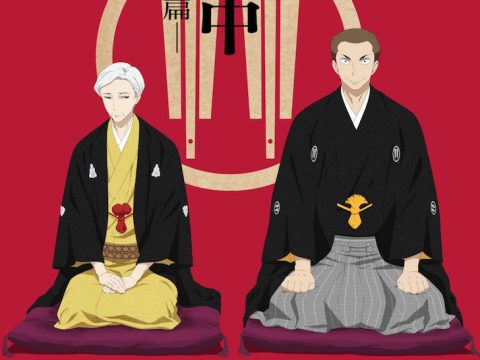 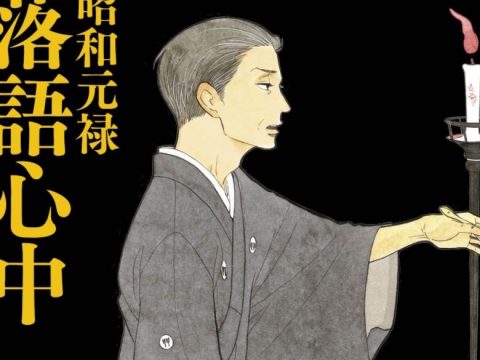