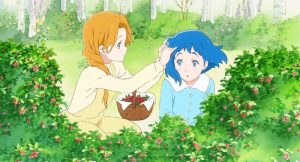 With just a week to go until the US release of Kyoto Animation’s Liz and the Blue Bird anime film, ELEVEN ARTS Anime Studio has shared a final English-subbed trailer. Directed by A Silent Voice‘s Naoko Yamada, Liz and the Blue Bird has a handful of Sound! Euphonium cast members reprising their roles at Kita Uji High School, so see how everyone looks in the latest preview of the theatrical feature below.

Mizore Yoroizuka plays the oboe, and Nozomi Kasaki plays the flute in Kita Uji High School concert band. As seniors, this will be their last competition together, and the selected piece “Liz and the Blue Bird” features a duet for the oboe and flute. “This piece reminds me of us.” Nozomi says cheerfully, enjoying the solo, while Mizore’s usual happiness to play with Nozomi is tinged with the dread of their inevitable parting. By all accounts the girls are best friends, but the oboe and flute duet sounds disjointed, as if underscoring a growing distance between them. Talk of college creates a small rift in their relationship, as the story evolves to reveal a shocking and emotional conclusion