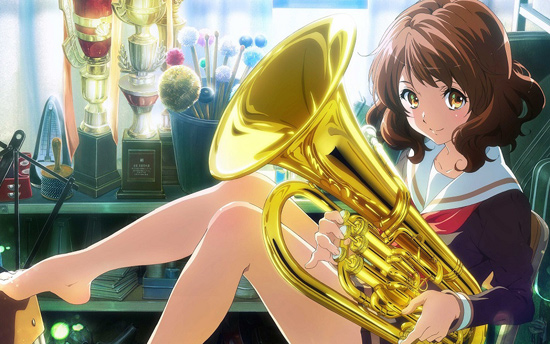 More than a few of you guys are pretty huge fans of Kyoto Animation, the studio behind Lucky Star,
K-On! and Free!. You may be pleased to learn, then, there’s a new series in the works at KyoAni
called Sound! Euphonium.

Sound! Euphonium, which is based on a novel, is about a high school musical instrument club and
its various ups and downs as it attempts to regain its former glory and advance to national
competitions.

KyoAni opened the Sound! Euphonium website and released a promo video in conjunction with
Comic Market 87. The series will premiere in April.

What the heck is a euphonium, anyway? According to Wikipedia-sensei, it’s “a conical-bore,
baritone-voiced brass instrument” which “derives its name from the Greek word euphonos,
meaning ‘well-sounding’ or ‘sweet-voiced’.” Never let anyone tell you you can’t learn from anime.