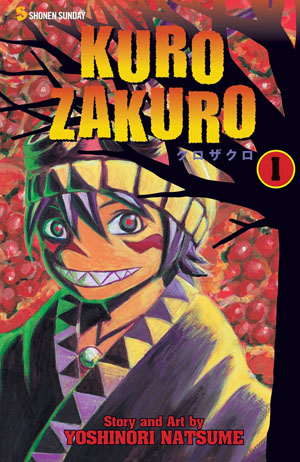 Mikito Sakurai is a high school student who can’t get a break. He’s mercilessly bullied at school and doesn’t even get support at home. There’s a girl he likes named Saki, but even she’s getting fed up with him for not even trying to fight back when the bullies beat him up. However, since Mikito knows what pain is like, he doesn’t want to cause more of it by attacking the bullies. Can’t Saki see he’s a pacifist?

Things start to change as Mikito’s sitting in a field by himself and a black cat comes up to join him. The cat’s been playing around with a little ball, like a cat toy, and it goes into Mikito’s book bag without his knowing. That night, the ball moves by itself and goes into Mikito’s mouth.

After that, he has a dream. In the dream, he meets a creepy kid with jagged teeth named Zakuro who asks what Mikito’s desire is. Recalling Saki’s words, he asks to become stronger. The kid is fine with this arrangement and says that in return Mikito will have to make the dead tree behind Zakuro flower.

When Mikito wakes up in the morning, everything’s different. His eyesight is perfect, so he no longer needs glasses. He’s ravenously hungry, and… he’s much stronger physically. When the bullies come after him now, he easily and brutally beats the tar out of them. What happened to being a pacifist? At first it’s kind of cool having this sort of power, but very soon everything sours…

Mikito learns that he’s turning into an ogre. As he does terrible deeds, it helps the dead tree flower. Before long, he desires human flesh for consumption and thinks about how easy it would be to kill people, including his own family members. Something has to be done before he completely turns into an ogre. Unfortunately, the only known way to stop the horror is for Mikito to die.

So far Kurozakuro has been a really fun, gothic horror read. Mikito is a sympathetic character right from the get-go, as we see him being bullied, and as an audience we’re going to be rooting for him. Even after he’s learned he’s turning into an ogre, he does what he can to fight it, showing he still has some of his humanity. In the back of the book, Yoshinori Natsume says he likes to write manga where people say, “I wonder what happens next?” and “I can’t wait to read the next chapter.” And that’s exactly the kind of manga this is.