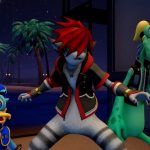 It seems like it’s been forever and a day since we last saw some fresh Kingdom Hearts III footage, but D23 Expo Japan 2018 finally put an end to the drought. In addition to a new trailer that highlights the Monsters Inc. world, Square Enix shared trailers for two versions of Utada Hikaru’s theme song.

Let’s start with the Monsters Inc. trailer, which presents a world with perhaps the most unsettling versions of our heroes yet.

Utada Hikaru’s theme is “Don’t Think Twice” in English and “Chikai” in Japanese:

Kingdom Hearts III is coming to PS4 and Xbox One sometime this year.