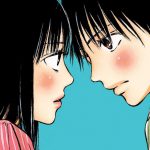 Karuho Shiina’s Kimi ni Todoke romance manga originally kicked off back in 2006, and has been a top-seller in Japan ever since. The end of an era is on its way, though, because home magazine Bessatsu Margaret announced that the series is officially set to end in the next issue, due out November 13.

Kimi ni Todoke will go out in style, at least. Not only will it be featured on the cover of the magazine, it will also have color opening pages.

Shiina’s series previously inspired an anime adaptation and a live-action film. Viz Media publishes the manga in North America. Here’s how they describe it:

Sawako Kuronuma is the perfect heroine…for a horror movie. With striking similarities to a haunting movie character–jet-black hair, sinister smile and silent demeanor–she’s mistakenly called Sadako by those around her. But behind her scary façade is a very misunderstood teenager. Too shy to fit in, all she wants to do is make some friends. But when the most popular boy in class befriends her, she’s sure to make more than just that–she’s about to make some enemies too!

Thor: Ragnarok Director to Cast Asian Actors in Live-Action Akira (If He Makes It)
Japanese Fans Discuss the Pros and Cons of Having Otaku Parents