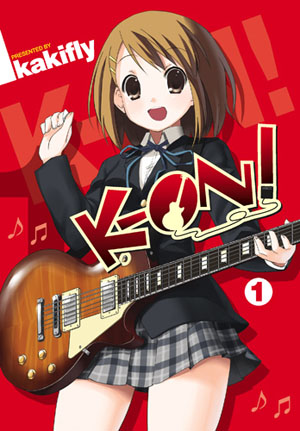 Mio is thinking about joining the literature club. Silly girl. She’s going to be forced into the pop music club.

Unfortunately, the pop music club is about to be disbanded. That means it must be rescued! Four members are needed and soon Yui, Mio, Ritsu and Tsumugi are the new high school pop music club. But let’s just say they’re not off to the smoothest start. For instance, Yui outright tells the other girls they’re not very good. Then again, she’s one to talk. Even though she’s supposed to be the guitarist, she doesn’t know how to play one. For that matter, she doesn’t even own one. Oh, and there’s the matter that she can’t read musical notation.

If these girls want to be a successful pop band, something needs to change.

Okay, so Yui finally gets her guitar. She likes to admire how she looks with it (and sleeps next to it at night), but how about practice? There’s also the matter of writing lyrics for their music, and let’s just say their lyrics are a little “fluffy.”

Mainly written in four panels, K-ON! follows the four high school girls with humor as they try, against the odds (or against their talents), to become a pop band.  After a while they get a teacher involved, and though she is willing to help them, she’s also more than willing to dress them up in embarrassing, cosplay-like outfits. Yes, K-ON! has its fair share of moe and fanservice, and it’s not just the cosplay. While it doesn’t get extreme with it, it’s there. And is it just me, or is there a shojo-ai undertone?

Some of the pages are in color, albeit the majority are still in black and white.  K-ON! is an easygoing sort of manga, relying on characters, humor and some fanservice. And music.  In fact, the end even has a bit on reading guitar chord notation. Will reading this inspire you to pick up a guitar and join a band?  Just please don’t write songs with the word “fluffy” in it.