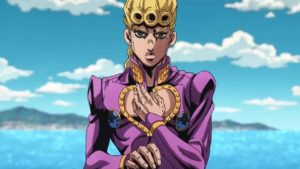 Some of the most impressive cosplay out there comes about when the cosplayer in question goes completely against their typical style. Kyoko Kano—one half of Japan’s famously luxurious and, yes, buxom—Kano Sisters recently did exactly that with a spot-on costume from JoJo’s Bizarre Adventure: Golden Wind.

While fans are used to seeing the sisters in revealing outfits, Kyoko used a bust nipper, body plate, and a muscle shirt to flatten her features and turn her into the spitting image of Golden Wind protagonist Giorno Giovanna.

Here she is next to one of JoJo’s creator Hirohiko Araki’s Giorno illustrations:

Fan reactions ranged from a simple “Wow. Just, wow!” to “Where did her bust disappear? Now that takes dedication!”

As a bonus, here’s an equally amazing take on Bruno Bucciarati:

This isn’t the first time for one of the Kano Sisters to attempt JoJo’s cosplay. Younger sister Mika previously cosplayed as Golden Wind‘s Trish Una.

As you might have guessed, the Kano Sisters are big fans of JoJo’s Bizarre Adventure, and it’s awesome to see them continue to express it in new ways.