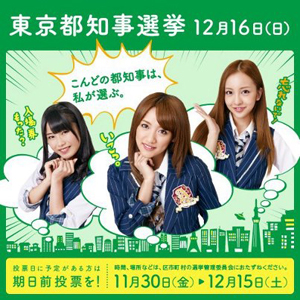 Politics and pop culture have been colliding the past week in Tokyo, with idols and anime characters playing a role in the city’s upcoming gubernatorial election.

Politics and entertainment have plenty of crossover in the States, too, with presidential runners announcing their candidacy on talk shows, SNL skits being an essential part of the election season, and former actors being elected to top spots.

But aside from Herman Cain cribbing one of his campaign’s signature slogans from Pokemon: The Movie, it’s safe to say Japan has the lead in blending its unique pop icons and politics.

Firstly, Tokyo’s “get out the vote” campaign, which has been plastered all over town the past week in the form of billboards, banners and commercials, is a plea to go to the polls from none other than AKB48, the oversized pop idol group. Specifically, members Minami Takahashi, Tomomi Itano and Yui Yokoyama urge Tokyoites to go to the polls with the slogan, “the next Tokyo governor – it’s my choice.” Most of AKB’s members, including Yokoyama are, naturally, under 20, the national voting age.

The second note comes from the campaign of Kenji Utsunomiya, an anti-nuclear (and, apparently, pro-anime) gubernatorial candidate. He’s been spotted campaigning throughout town accompanied by Madoka Magica cosplayers, including someone cosplaying Madoka herself, as well as the deviously cute Kyubey, who viewers of the show recognize as a political liability, as promises made to him can be quite dangerous.

Incidentally, Tokyo’s outgoing governor, Shintaro Ishihara, has not been seen as a friend to the anime community, helping to strengthen a law in 2010 that increased restrictions on the sale of manga and anime to under-18 year olds.

Japan’s most famous otaku politician is probably Taro Aso, who declared his love for anime and manga during his very short prime ministership, leading to a still-standing billboard in Akihabara dubbing Aso a “Cool Old Dude.” 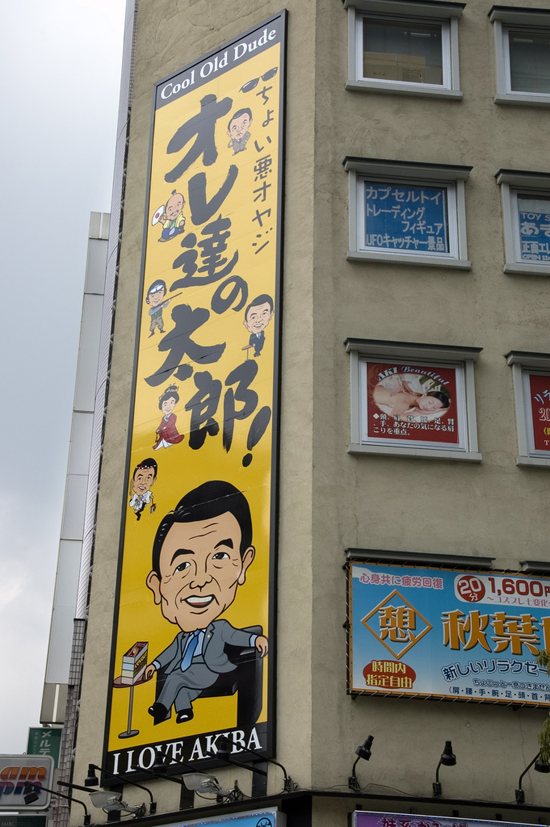