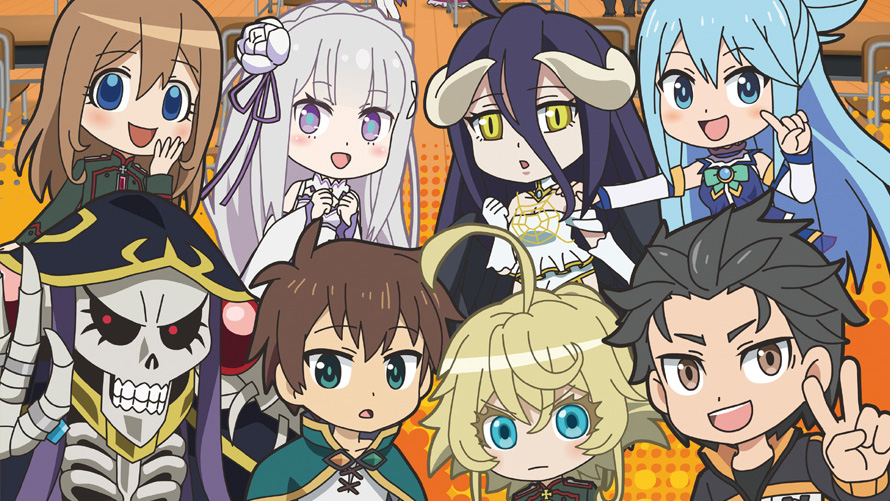 Some of the most popular isekai anime collide in the adorably ridiculous ISEKAI QUARTET!

If you are an anime fan and somehow don’t know the term isekai yet, you’re one of an increasingly small number. The concept of isekai—literally “other world”—is practically as old as literature itself. But in recent years, anime has created and reinforced a set of tropes resulting in a very specific sub-genre.

By its most basic definition, isekai is any story where the protagonist travels to another world, usually fantastic in nature. Think stories like The Wizard of Oz and Alice in Wonderland. In modern anime terms, there are a few more elements that are often, though not always, present. The protagonist is often male and in his teens to twenties, a shut-in or gamer. The alternate world often functions like a video game, and occasionally exactly like a video game at which the protagonist is adept. If our hero is really having a bad day, he ends up in a “reincarnation isekai” where he swaps worlds by dying and being reborn.

It’s possible, but difficult, to watch every isekai series currently out there. But what if there was a show that combined four into one package? Could it be watched as its own stand-alone work? 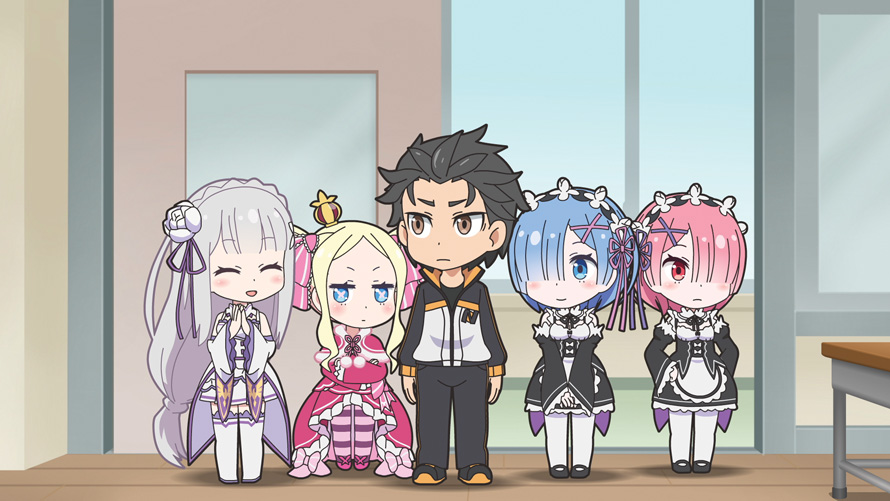 Kadokawa’s chibi parody anime series Isekai Quartet does exactly as the title advertises, combining the casts of four popular isekai series. Conveniently, all four of these big names are owned by Kadokawa—meaning making it happen in the first place was probably a no-brainer.

The four titles represented—Re:ZERO, KonoSuba, Overlord, and The Saga of Tanya the Evil—all have the majority of the previously mentioned traits in common. Our four protagonists (Subaru, Kazuma, Ainz Ooal Gown, and Tanya) all started out as Japanese males in their teens and twenties. Two were reincarnated, and two have taken on new forms during their travels. Three of the four worlds have fantasy game aspects to them, with one being a direct copy of an in-universe video game. Still with us? Good, because now it’s time to go back to school.

For our four heroes, this is just a return to form. But as they reacclimate themselves to the lives they left behind, we get to see their companions (be they girlfriends, hangers-on, minions, or otherwise) attempting to integrate themselves into the high school caste system. 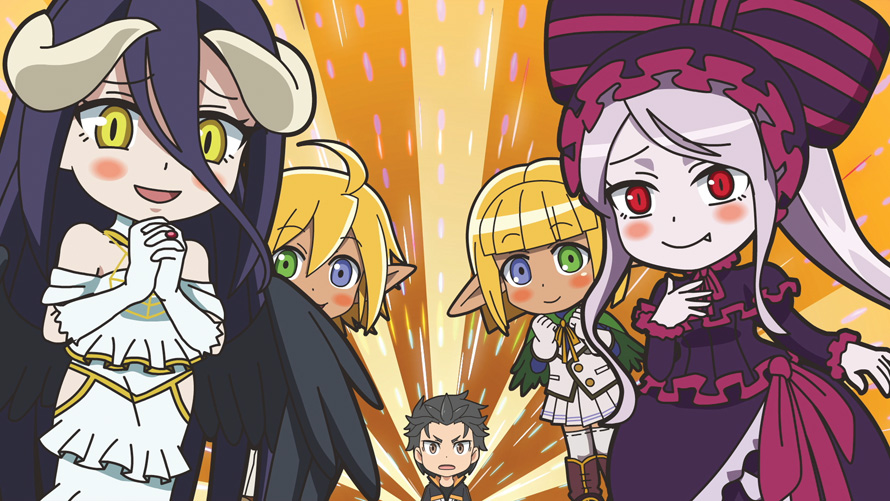 As mentioned, all four of the shows have a lot in common, and we get to see that played out as the characters interact. For instance, our protagonists are very popular, and their respective girls are very protective. Cue half a dozen witches, demons, and goddesses firing death glares at each other, completely convinced that every other female in the room has plans for their respective protagonist.

When it comes to the protagonists themselves, they’re actually pretty happy. After all, this is probably the closest they’ll ever get to coming home again. Ainz Ooal Gown and Tanya von Degurechaff, upon discovering they both used to be Japanese salarymen before turning into a giant skeleton and a little girl, respectively, spend their time reminiscing about coffee. Subaru and Kazuma find a similar connection when discovering they’re both displaced high schoolers … but that’s about all they have in common. 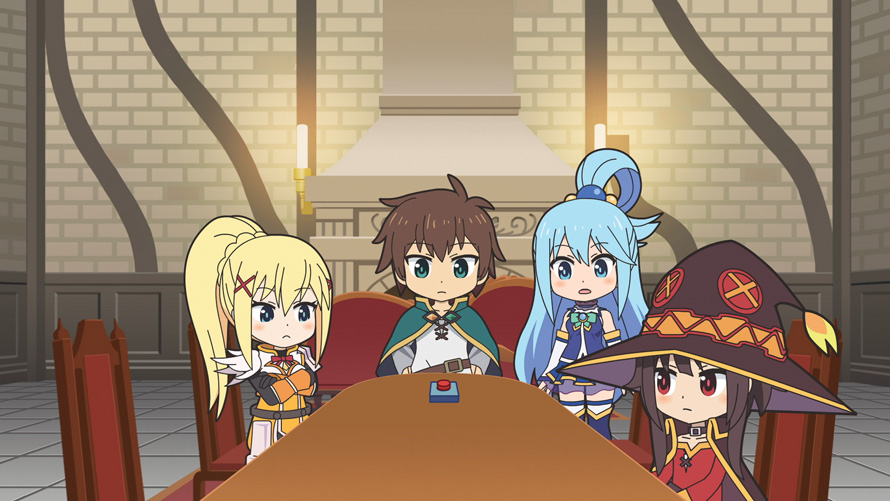 As silly as Isekai Quartet is, and as much as it plays on similarities between characters, it pulls much of its humor from the different uses of those shared ingredients. It’s tempting to call isekai as a genre “samey,” and a lot of times it is. Fans who aren’t deep into it likely won’t have the patience to watch multiple series and hunt for those subtle variations. Fortunately, those subtle variations are shorthanded here and exploded out for the sake of comedy.

All that said … if you are new to the isekai genre and this is the first thing you encounter, is it a good introduction? Or are you getting in over your head too soon? 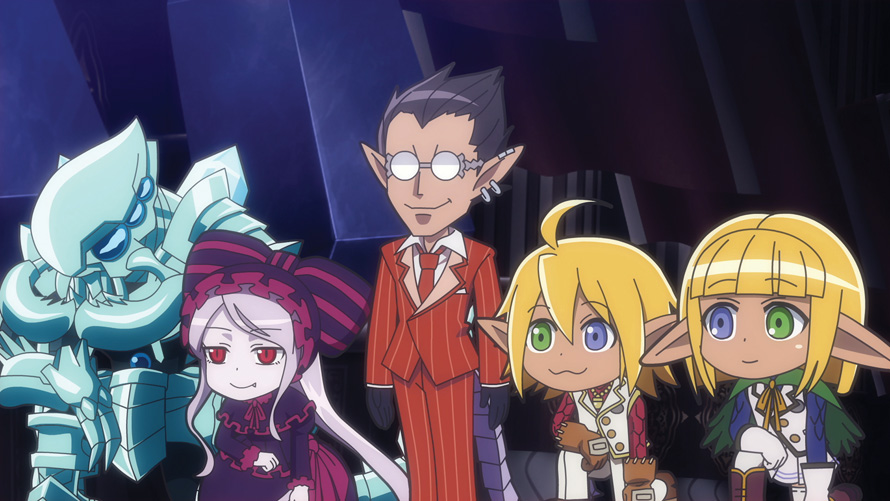 Isekai Quartet plays out like that massive crossover fanfic you find during a 4 am bout of insomnia and just can’t stop reading. It’s silly, it’s self-aware, it’s highly unlikely, and all the characters are just this side of being caricatures of themselves. It’s for those very reasons, though, that it makes all four shows within it far more approachable.

The show does a great job of introducing each character, both in literal terms as they’re new students in a classroom and via their interactions with each other. Even if you’ve never seen a single episode of Re:ZERO and only know Rem and Ram from their Internet fandom, you’ll learn their respective relationships to Subaru pretty quickly. The same goes for Kazuma and his hot mess of a party, and Tanya and Ainz Ooal Gown as well.

Naturally, there’s a lot in there for existing fans to appreciate. Much of that is in the anticipation of characters interacting: how will Kazuma react when he discovers Subaru’s isekai journey is blessed compared to his own? What will Albedo do if literally anyone gets near her glorious lich king husband? 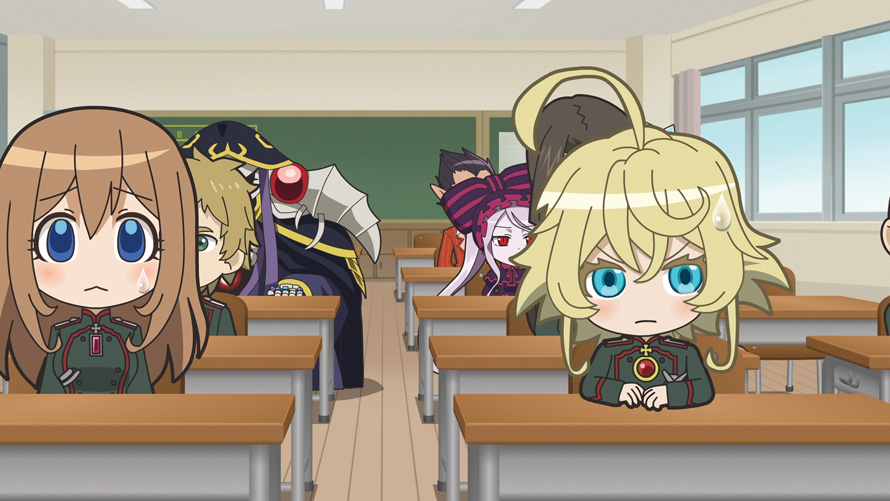 Granted, the series is comedic where not all its respective parts are. The Saga of Tanya the Evil is brutal and metaphysical, which viewers aren’t necessarily going to take away from a gag anime. Despite those necessary tonal changes, Isekai Quartet is a good way to decide which shows to watch. It’s almost like isekai comparison shopping. You get a quick look at what each show has to offer and what makes each variant of the genre different from its neighbors. And even if you end up not wanting to watch any of the shows in their undiluted forms, you’ve had a good time getting there.

Isekai Quartet’s mere existence seems to indicate that the genre is saturated—and maybe it is, and maybe it will become even more saturated in the coming years. But for now, it’s also a cute, silly demonstration of what it has to offer at its best and most self-aware.

ISEKAI QUARTET is now available to stream through Funimation and Crunchyroll, with a second season in the works.