Invaders of the Rokujyoma!? Prepares to Haunt Home Video 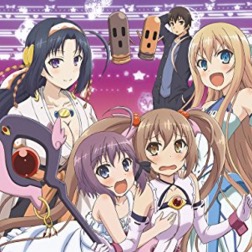 There’s nothing better than the sweet freedom of living on your own. That’s what Kōtarō Satomi expects to discover when he sets out on his own at the start of high school, but he soon finds some otherworldly inhabitants just won’t leave him be in

As much as Satomi was looking forward to living on his own, he just had to choose Room 106 of Corona House based on how cheap it was. It turns out there might be a reason for that, because he’s soon visited by a bevy of supernatural girls, each with their own reason for wanting to live in his room.

It isn’t long before Satomi realizes these otherworldly spirits aren’t going to back down from their demands. Thus Satomi finds himself stuck in the most bizarre of living situations with a gaggle of ghostly gals.

Invaders of the Rokujyoma is directed by Shin Oonuma (Baka and Test, WATAMOTE), with Shogo Yasukawa (Terraformars, Hyperdimension Neptunia) on series composition for the SILVER LINK production. This turn of events might not be ideal for Satomi, but it’s perfect popcorn poppin’ entertainment for the rest of us in Sentai’s Invaders of the Rokujyoma!? Complete Collection,