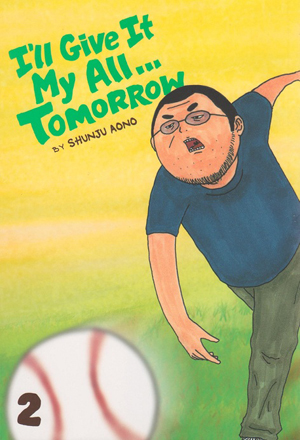 I’ll Give It My All… Tomorrow sounds like the creed of a procrastinator. When I first heard this title, I pictured a story about somebody who did nothing and didn’t want to accomplish anything. That’s not what this is about at all. It’s about a guy who wants to accomplish a lot… but just can’t.

Shizuo Oguro is the middle-aged hero, if hero is the right word. For years he’s worked at crummy jobs, but now he’s decided to pursue his dream of becoming a mangaka. He works hard at this and shows his pages to editors, but he never gets anywhere.

I feel sorry for Shizuo. He seems like a well-meaning but kind of pathetic character. He does try, and I want him to succeed in the end. Even the way he’s drawn makes him look like an insecure guy, and another character describes him as “the walking definition of ‘failure.’ ”

I’ll Give It My All… Tomorrow is often described as a comedy, and in some ways it is. In other ways, it’s not; it can be downright depressing. It’s as if the manga wears its heart on its sleeve. I think anyone who has seriously pursued some sort of artistic career can relate to what Shizuo goes through with all his rejections.

Another character, Shuichi, is often with Shizuo and seems even worse. He’s the one who doesn’t seem to have anything going for him, much more so than Shizuo. Shizuo is the helpless but somehow kind of endearing one, and Shuichi is the angry, bitter one who would also have to be a “walking definition of ‘failure.’ ”

This manga is deceptively simple, but it also holds a strong meaning and an understanding of what it feels like to not be what you want to be. The art is also pretty simple, often lacking in detail. If this art style were used in other manga, it would probably look as if it’s missing something. However, here it works with the concept. Shizuo’s story probably wouldn’t work if it were done with flowery or extravagant drawings, so it really does fit this way.

There are two short bonus stories at the end that follow the life of Shuichi’s sister. This gives more of an idea of Shuichi’s past, just as some flashbacks to Shizuo’s childhood help in that arena. This is an interesting—if sometimes sad—manga.

Danica Davidson has written for MTV News, Booklist and Publishers Weekly, among other places, and is currently seeking to publish a YA novel. She can be found atwww.danicadavidson.com and Twitter: @DanicaDavidson.